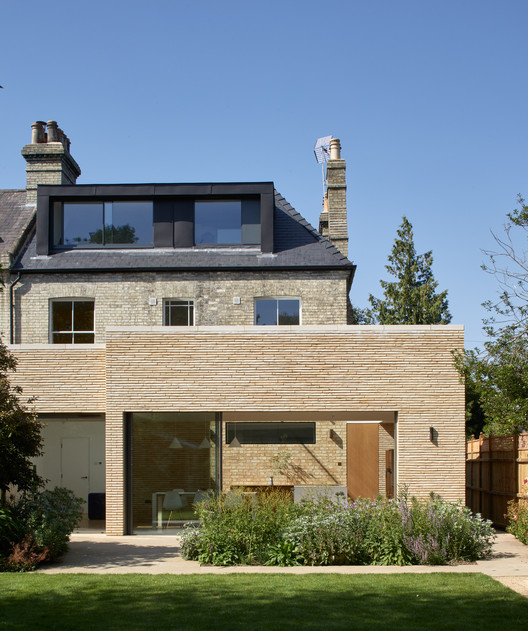 Text description provided by the architects. Sun Slice House project is a transformation of a Victorian semi-detached house in South Cambridge. The result is a meticulously designed extension, enveloping the existing house and marked out by a series of skylights creating an abundance of natural light inside the home. Outside, a new garden, designed by landscape designer, Jane Brockbank, links the house with the ‘Dark Spa’; a secluded retreat for busy parents and contrasts with the light-filled interiors of Sun Slice House.

The homeowners, a young, ambitious couple with three children, wanted to extend and restore the house which had fallen into disrepair. Some of the essential requirements were to create a home-schooling area for the children as well as a home working space for the parents, both of whom work from home. They also wanted to add a new-build outdoor leisure space to the end of their garden to house a gym, sauna, and spa area.

Working closely with homeowners at every stage of the process, Neil Dusheiko Architects has struck a sensitive balance between preserving the historic character of the existing building, situated in a conservation area, and introducing new elements that feel robust and timeless. The team carefully guided the development of these ideas by running design workshops, building physical and digital models to test spatial ideas, and exploring atmospheres created by different materials. They also produced prototypes and mock-ups of the various components throughout the process, rigorously testing the designs in order to provide a sympathetic addition to the existing property whilst reflecting the personalities of the homeowners.

Neil Dusheiko said: “We wanted the extension to feel like it was enveloping the existing home, creating a new layer around the older shell of the house so that they would read together. We also wanted to design the house from the inside out, where the form of the extension would be created by a combination of solving environmental issues [solar and thermal] as well as dealing with the practicalities of everyday life from parents who work from home to home-schooling children.”

The form of the extension has been carefully designed, through computer-aided solar studies and physical models, to create a naturally illuminated north-facing rear extension, maximising light through a rear glazed façade and carefully positioned skylights.

Utilising daylight analysis software, the sloped roof of the rear extension was shaped to minimise the impact on the light of neighbouring properties while maximising natural light internally and allowing views of the existing façade as one moves from the corridor spaces to the open plan kitchen/dining spaces. The sensitive design of the extension is enhanced through the use of Petersen Kolumba Brick – a slender, handcrafted brick which harmonises with the yellow stock brick of the original house and is combined with existing bricks salvaged from the demolished wing.

The street-facing collection of rooms have been refurbished and updated, while a timber-clad service core is situated in the centre of the plan and hides all the storage and utility spaces for the home. As the house is designed for a growing family; the home study area is customisable and able to develop with the children as they grow.

A zinc-clad loft extension caps off the top of the house, containing the master bedroom with views over the garden to the north. There is also a craft room, an extra bathroom, and a walk-in wardrobe on the second floor. The vaulted roofs are planted with a large sedum bed, allowing views of greenery out of the first-floor windows and encouraging biodiversity.

The garden space has been enriched with the help of landscape designer, Jane Brockbank, creating a haven for the family which includes a lawn, greenhouse, allotments, and a meadow garden, and links the house with the new-build “Dark Spa”.

One approaches the outbuilding along a footpath made of clusters of Kolumba brick and gravel – recalling the materials used in the house. Passing the formal lawn and the raised vegetable beds, the garden gets wilder, and the outbuilding nestles within a wild meadow.

A single façade is presented with the entry door carved into the monolithic form. A mirror is strategically placed in the exercise room, giving a sense that the garden continues beyond. Skylights frame the sky in the shower and the changing room. There is an inward focus here, and the feeling is one of relaxation and detachment to every day to allow the homeowners to unwind completely. It is an introverted building, housing a sauna, Japanese soaking tub, shower, gym, and meditation room. There is a fold-down bed concealed within the timber cladding.

The walls are clad in dark Sapele timber and floors are made of natural black slate. There are two skylights that echo those in the main house and allow for views of the sky and dappled light to fall from the surrounding trees.

Situated in a garden context which used to house black timber coach houses and stables, the outbuilding is clad in Shoi Sugi Ban or charred black timber; a secret retreat screened by the delightful meadow planting. The black timber absorbs light and shadow and is the antithesis of the Sun Slice House, although thoughtfully linked by how the materials are made. The Kolumba clay bricks of the house are formed in kilns and fired by coal; the cedar cladding of the spa is also made by charring. The final surfaces of both are the product of Biophilic processes that results in beautiful, imperfect surfaces. The Japanese term Wabi-Sabi describes this. Both the extension and the new-build spa have green roofs promoting biodiversity.

Key to this project is the sensitive consideration towards daylight, restoration work, and use of rich materials. Existing stock bricks, where available, have been re-used to construct the new extension, preserving the memory of the old house in the new design and all the existing sash windows have been reused and infilled with specially designed insulated glass panels.

The two rows of double-glazed skylights in the extension have been orientated to maximise the solar gain and reduce the amount of mechanical heating needed during the day, cutting down on the need for artificial lighting. Alongside this, the insulation levels in the entire envelope have been upgraded to minimise heat loss, improving U-values by using insulated plasterboard to the walls and a combination of rigid insulation and Rockwool to the floors and roof.

Underfloor heating runs throughout the house and a central MEV unit, plus 3 x dMEV fans, provides ventilation, allowing for a constant feed of fresh air from the outside. All the heated air is recycled back into the house before it is exhausted outside. Low-energy LED lighting has been used wherever possible, as well as eco-rated appliances and an eco-rated boiler and hot water storage tank.