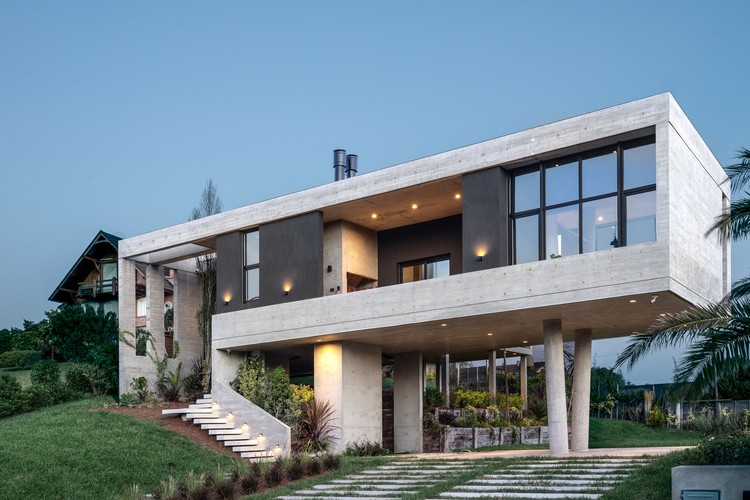 Text description provided by the architects. General context. There is a ground located in the city of Pinamar, in an area very close to the sea, and with the characteristic of having a side slope of almost five meters. The neighborhood where the house will be located is well established, with paved streets. Client. Given the unbeatable condition of the land, they would like to have a home with direct views of the sea. It also emphasizes safety as a crucial condition.

Idea. A house completely off the ground is proposed, taking advantage of the natural conditions of the land to save the unevenness, and in turn allowing this to meet the client's requirements. In turn, it also allows a greater use of the land, since it is released almost entirely. Functional. The house is presented as an L that flies and generates views of the sea from all main rooms. The professional studio is designed with independent access from the street and is internally connected to the house, which gives the possibility of becoming an extra bedroom in an eventual case.

Structure. It is conceived as the way by which the ideas raised are expressed, since the concrete structure allows raising the house, but far from staying there, it generates multiple possibilities: inverted beams as railings, columns and volumes going down to the ground and participating of the aesthetics of the house. The large cantilever on which the living room rests also stands out, which seeks to provide the idea of a volume that flies. Constructive. Main idea: Zero maintenance. Each decision arises from this premise: the exposed concrete as a finish, the masonry parts in black, the black pvc carpentry. The use of metals and wood outdoors is totally avoided, since they can be damaged by the proximity to the sea and the salty environment.