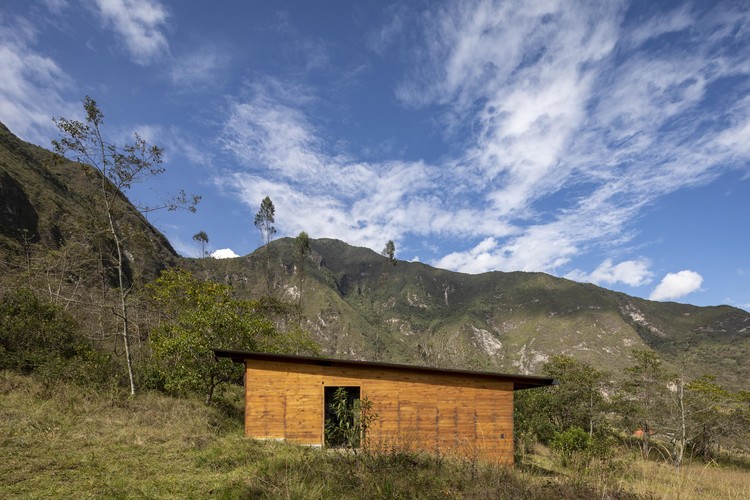 Text description provided by the architects. The client, an Ecuadorian writer, came to the workshop with an assignment: to design and build his house in the crater of the Pululahua volcano.  To accomplish so, he provided us with a watercolor painting that portrayed a stage of the Italian theater. He also asked us to read a couple of his novels and gave us the task of watching a Hungarian film called "The Horse of Turin". Finally, we agreed to meet six months later with a proposal.

As a result, we translated these references into a house that was fundamentally divided into two parts. The first one, made up of the living room, the dining room and the kitchen. These would be the public spaces, alluding to the Italian theatre stage. The second part would distribute two bedrooms, a study, a library and a bathroom, allowing the writer to have a solitary retreat using this reading area.

Currently, the project is located on a slope of the crater with an open view of the horizon sunset showing the Chivo and Pondoña hills. On a base, a rear retaining wall and a concrete slab, a light structure was erected: braced with wooden slats. This was covered with recycled red pine staves. The walls were filled in with rammed and compacted earth and hay bales. We call this system of (twelve-centimetre-thick) earthquake-resistant walls: rammed earth with lost formwork. Beams and cable tensors rest on this system.  On top of these, a lightweight roof made of recycled triplex and asphalt resin. Finally, the wood was polished and sealed to protect it from the weather.

As the project was far away, the distance became a challenge that extended the work for more than two years.  The nights of camping under the stars were definitely worth it.