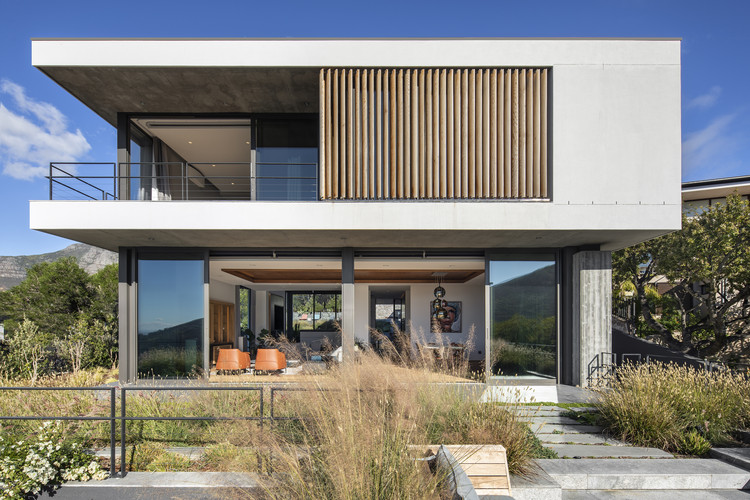 Text description provided by the architects. This home embraces the beautiful natural landscape provided by the slopes of Table Mountain, Lion’s Head and Signal Hill.   Situated in the center of the City Bowl’s curvature between Devil’s Peak and Signal Hill, the building’s site offers expansive views of the city and the surrounding metropolitan area.

Some of the challenges presented by the site were negotiating the slanted terrain leading from the lower cable car slopes into Table Mountain National Park with a coherent spatial flow and mediating environmental factors whilst maximizing and framing the panoramic views of the city, bay and mountains beyond.

The building is defined by its relationship to the landscape; in some instances, revealing glimpses of the natural setting while in others blurring the definition of interior and exterior spaces by opening up the interior spaces completely to the surroundings.

The massing of this three level building takes clues from the mountain slope. The base of the building (in natural stone and gabion walls) is seen as an extension of the rocky outcrops on the slopes, and is housing service areas, garaging, a staff apartment and a guest apartment.  The base and stone walls are terraced and elevate the natural slope to form a new landscape for the main house to occupy.  The living areas are articulated as glazed “negative space” atop the stone base, but sheltered below the cantilevering and heavier volume of bedrooms above.  This arrangement ensures a continuous visual and spatial connection from Table Mountain to Table Bay. A double volume kitchen at the mountain side of the house enables interaction between the more private spaces (such as study, tv room and bedrooms above) and the living area below.

The relationship of the house to both its immediate and macro-scale landscapes is further given emphasis by placing the pool and undercover entertainment areas at the “back” or mountainside of the building; thereby enhancing a sense of being enveloped in the mountain’s slopes and being offered some respite from the city’s energy.