Liu Yihuan, Zhang Xingwang and Lin Zichun from the Harbin Institute of Technology in Shenzhen have won the Covid-19 Community Memorial Design Competition. DesignClass hosted the competition to create a local memorial that honors the individuals and families affected by the virus. 145 designers entered from dozens of countries.

The competition had 5,000 people vote for their favorites among the 145 entries. As the grand prize team stated, their proposal was designed to "honor those who have passed and bring solace to families." Their proposal was a series of phone booths in communities of Wuhan. "The deceased have fallen asleep, but their mobile phones are still retained. Community workers will collect mobile phones of the deceased according to the wishes of their families." The idea is that people can listen to strangers' voices on the premise of observing the rules of self-isolation.

Each phone booth can only accommodate one person, while the shell is made of concrete and transparent glass. The array of telephone booths is arranged in the community square. Turning on and off, speaking and listening, the booths would become an interactive element and memorial in the urban fabric. Find out more about the grand prize winner, finalists, and Designer's Choice winners for the Covid-19 Community Memorial Competition. 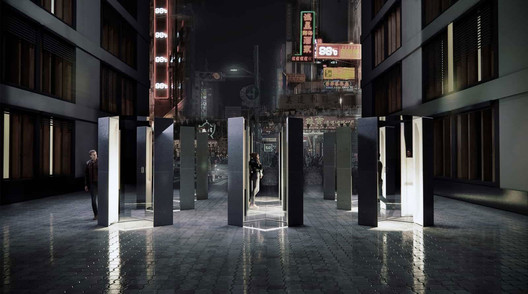