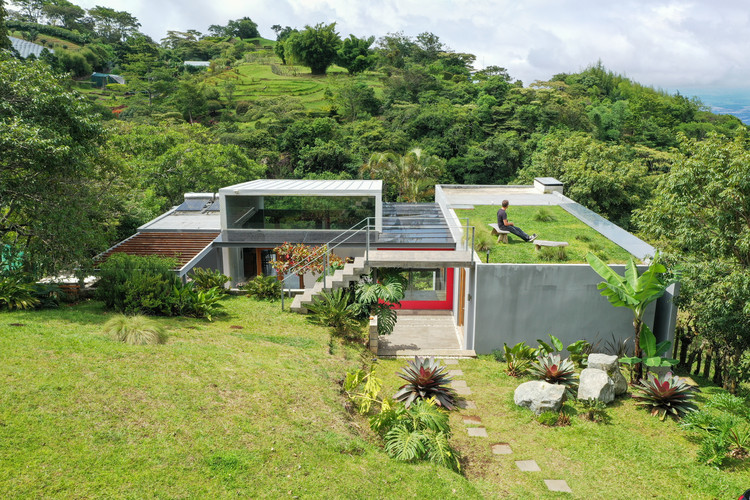 Text description provided by the architects. The property is located on the slopes of the mountains that bound the south side of the city of San Jose, Costa Rica. The challenge of the project was to reuse the majority of the structure of two existing buildings that were never completed and had stood vacant for ten years. As the concrete work was in good condition, the architects decided to reuse as much of the existing as possible. The aim however was to completely transform the building and create a home that integrated with the site and to take advantage of the beautiful views of the city, forest and mountains.

The approach was to connect two existing structures with a transparent glass circulation space that contains the staircase to the lower level. All living spaces are placed on the upper entry-level, and the 3 bedrooms are on the more private lower level. Cut into the hill, an entrance courtyard is created that provides a place of shelter during the windy months of January and February. Off this courtyard are the entrances to the main house as well as to the adjacent studio. The studio is covered in a green roof that maintains a stable indoor temperature and also creates a usable roof space.

The living level has 3 large sliding red-framed doors that can be opened up to allow for a sense of connection to the environment and also to facilitate cross ventilation. As the property is located at 1400 meters above sea level, even though at a tropical latitude, the altitude keeps temperatures mild year-round. This means that the home needs no heating or cooling most of the year. On the rear chilly nights in December, a fireplace provides warmth. A sustainable home with low energy usage and minimal environmental impact was a key goal.

Fortunately in Costa Rica, 90% of electricity production is produced from renewable sources such as hydro, geothermal, and wind energy. Despite this, the designers still strove to reduce energy usage significantly. LED lighting was provided for 100% of the home. Hot water is provided by solar hot water panels. Also by relying on cross ventilation, AC was not necessary and thus not installed. The reusing of a large portion of the existing structure helps reduce CO2 emissions. Lastly the metal roofing that was removed from the original building was reused as metal decking for the concrete roof slabs.

The form of the home is defined by 2 separate volumes. The west volume containing the dining and kitchen has a raised sloping roof that creates a panoramic window that frames a view of the nearby iconic mountain called Pico Blanco. In a similar way, the red door frames become living picture frames for the views to the exterior celebrating the owner's love of photography.

The result is a home that is constantly changing as the light moves during the day. The large openings and balconies help create connections to the exterior so the home feels like an extension of its local environment. 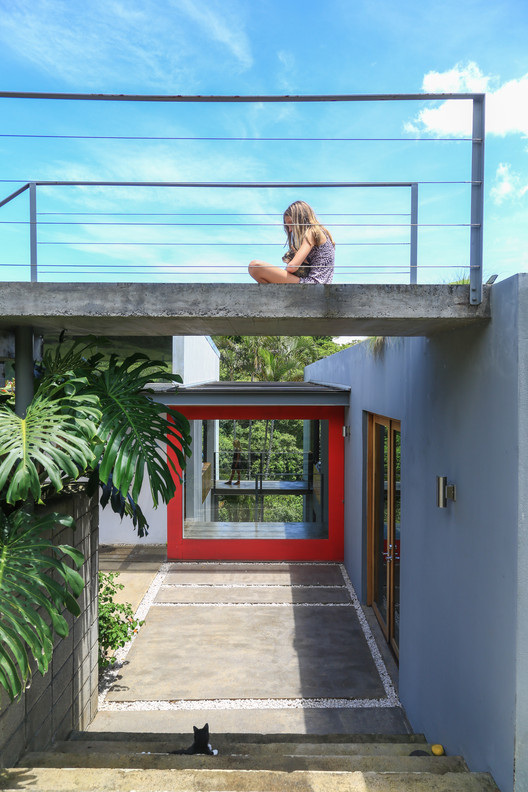