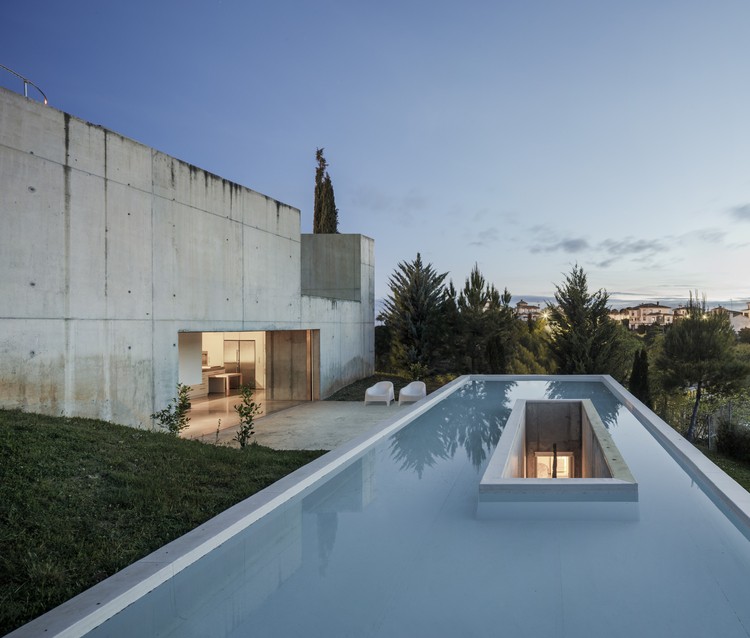 Text description provided by the architects. The house can be interpreted as an item incorporated into the landscape. It is dug into the ground, setting the bedroom in the deepest zone, isolated from the outside, while the half-buried and the kitchen have views of Sierra Nevada. Two pavilions on different levels, interconnected by an underground passage, make the day zones independent from the more private rooms. The degree of freedom of the interior circulations is reminiscent of the movements in nests built by termites and other insects that live underground. The house is inspired by these strange, apparently random, aimless movements, and the traveling times involved. So we can use the chosen itinerary to shorten or stretch the time of the physical action of moving. We can use different times to link the same rooms, in other words, accelerate or slow down the time it takes for us to move to the same place by choosing different paths.

Outside, the entrance to the house is from the roof, an earthen garden/lookout situated above the living room, which allows domestic and work activities to be taken outdoors in suitable weather conditions. Above the bedrooms, a water tank containing a six meter long patio is a source of luminosity for the interior while at the same time prolonging the reflected view of Sierra Nevada into the house. The patio in the water provides lightening and ventilation to the rooms beneath the tank and also acts as a thermal regulator for each season. In summer, the water spills over the walls to provide cool relief from the intense heat, while in winter, it is a natural isolator. The moist concrete walls in the patio will have a crystalline appearance, and their color and texture will gradually change over time as moss and lichen start to grow on them.

It was decided to dispense with any sort of interior rendering. The concrete structure is left bare, only clad with white plasterboard and the light entrance points to highlight certain positions, providing an artistic treatment to the way the rooms are lit. The large picture window and the roof garden are the only spaces open to the exterior where the inhabitants can adapt their lives to the seasons, come rain, snow, wind or sun. This is a proposal for life that makes reference to a quiet occupation in a natural environment. 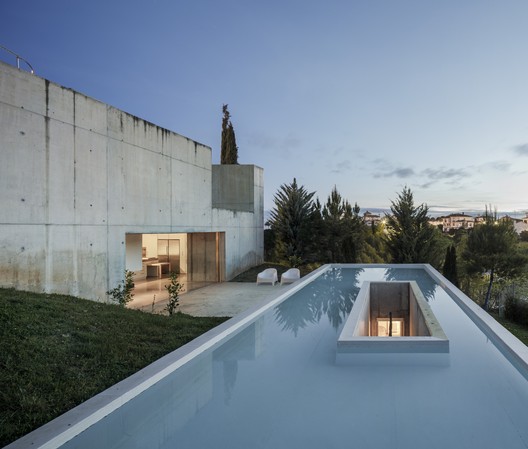