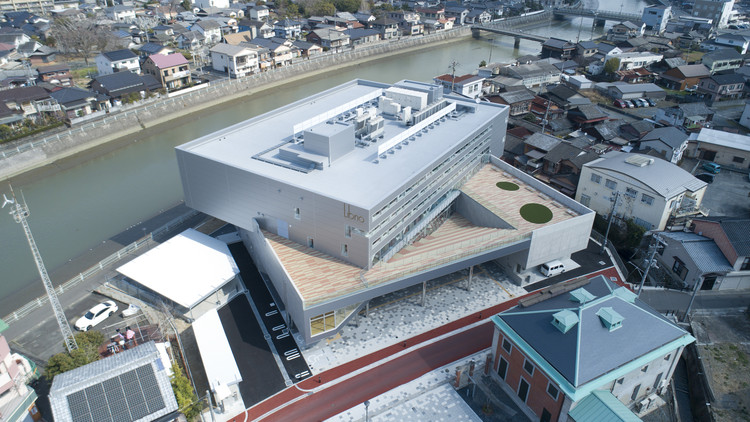 That Is Only Possible There. When building public architecture, especially in a  rural region, we believe that the utmost importance is to create a building that is only possible there. By drawing upon the historical context of an area, we want to create meaning of the architecture to situate in the area.

A Town Called Yukuhashi. Yukuhashi City, in Fukuoka Prefecture, is located about 25 kilometers South-Southeast of Kitakyūshū City. It is a central city of the Keichiku Region with a population of roughly 70,000 people and, in recent years, has become a commuter town for those working in Kitakyūshū City. The name “Yukuhashi” comes from a merger between two former villages by the municipal system: the [行- read as “yu”] from the former Gyōji Village (旧 行事町) and the [橋] from the former Ōhashi Village (旧大橋町) make [Yukuhashi・行橋]. The planned site of the project was positioned along the right bank of the Nagao River on the boundary between the former Gyōji and Ōhashi villages while repairing and preserving the townscape of the two former village areas.

Come the Meiji Era, the Yukuhashi branch of the Old Hyakusanju Bank (now known as the Yukuhashi Red Brick Gallery) was erected in front of the planned site. Supervised by Tatsuno Kingo, the Red Brick Gallery symbolized the economic power that Gyōji and Ōhashi held at the time and still remains a building of great significance today.

Architecture That Embodies Difference. This project served to spark improvements to user-friendliness for local residents and create a bustling city center. The expectation was not only of a library that could attract many visitors but a multi-purpose complex that could facilitate civic activities as well as child-care support.

We sought to build something here that could simultaneously embody the differing properties of symbolism and locality, and prosperity and serenity, using the rich history of the two regions that came together to become Yukuhashi.

Twisting Space. The upper and lower levels were purposefully twisted to face the Former Gyōji and Ōhashi Villages, respectively. Then, the building was zoned so that the lower level could be crowded and hectic and the upper level could be increasingly quieter to accommodate various functional demands. The lower level faces the Red Brick Gallery and pays homage to its history while also handling local activities and giving the town a novel opulence. Meanwhile, with scenic views of the Nagasa River and surrounding mountains, the layout of the upper level makes for a tranquil space that is ideal for reading seats and study areas.

Tremendous effort was devoted to organizing the logistics of bringing these twisting levels to fruition. The steel construction of the upper level lightens the cubic volume and makes the large overhanging possible and the steel-framed reinforced concrete construction of the lower level effectively propagates the stress from the steel frame of the upper level. Not only did we make the openness of the space compatible with the misaligned design, we were also able to make the building economical and earthquake-proof.

Architecture That Spins History. In the city center stands a twisting building. Its entire appearance may be atypical, but depending on which angle it is viewed from, it seamlessly blends in with the surrounding residential area.

The twisting frame uses the locality and its past as a starting point and then incorporates numerous functional demands. Even if the purposes it serves change over time, the structure will surely last. Finally, within the historical context of this place, we hope that this building will continue to spins history. 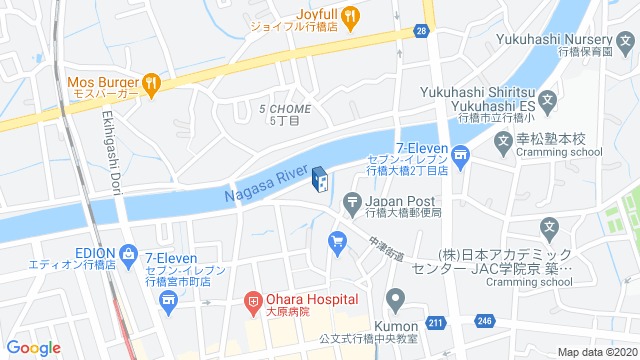