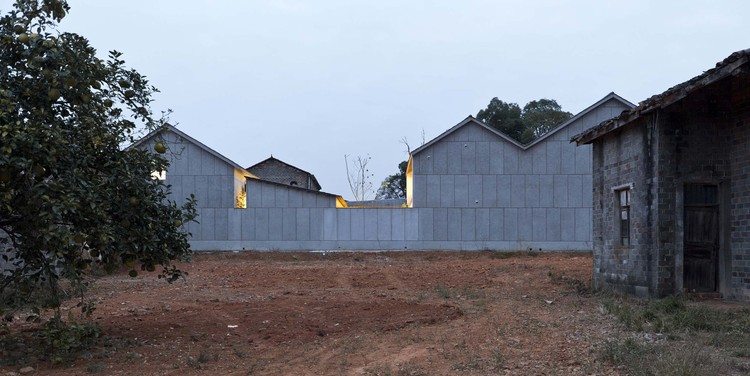 What kind of house to build in the countryside? We hope that this house grew out of this land, It uses skilled technology and materials of local workers, It is coordinated with surrounding buildings in terms of scale, form, spatial relationship, and materials We can draw nutrients from traditional buildings and apply them in new buildings. It is new in terms of construction techniques and materials. And it is old, and it is in the same line as traditional architecture. It is not a formal imitation, but a conceptual one.

Relationship with surrounding venues. The base is long and narrow, and the surrounding buildings are mostly two stories. The new building is much larger than its neighbors. In order to be more coordinated with the surroundings in terms of volume, the new building is divided into three parts from south to north. It adopts a courtyard layout: the living room, kitchen and dining room, the main house, and buildings are connected by courtyards of different sizes.

Spatial relationship. The partition walls and gables of traditional buildings are mostly parallel, and the rooms are similar. In this project, we arranged the partition wall between the master bedroom and the study room perpendicular to the gable, leaning to one side, without reaching the top, it divided the space into one large and one small. The two spaces maintain a certain visual connection. and the same slope Two different feeling spaces are formed under the roof covering.

The construction system of traditional buildings will be clearly communicated after completion, but the combination of modern construction methods and rural construction levels, as well as people's requirements for comfort, make the construction relationship and the final effect appear to be divided. In the living room, we try to use the beam as an element to participate in space shaping. The beam uses a small wooden template. The rough texture strengthens the feeling of the beam in the space, and the construction exists in the space in a fragmented manner.

In terms of interior materials, gray floor tiles are used for the ground, white paint for the walls, and gray paint for the roof. we respond to the material relationship of a traditional building with the most common materials that can be purchased in rural areas, under the local construction capacity,

Facade relationship. Local buildings have corridors on the south side, and most of the windows are on the north and south walls. The south is rainy, and the deeper corridors can provide shade and reduce the erosion of doors, windows, and indoors by rain. The facade design continues the traditional building's response to the environment. The windows are mainly set on the north and south sides, facing the inner courtyard, so as to obtain sufficient daylight and ensure privacy. There are overhanging eaves on the first and second floors on both sides of the north and south to shade and prevent rain. Therefore, the waterproofness of the wall material can be lower, and white paint with a rough texture is mainly used. We use water-brushed stones to enhance waterproofing at the foot position, The continuous horizontal long windows imply the internal frame structure and function. The beams and window sills located above and below the long windows are exposed with small wooden mold concrete, and the structure is more actively involved in the facade composition.

The gables on the east and west sides of the building and the courtyard walls on the four sides used Swash stone. Swash stone wall is widely used in local buildings in the 1980s and 1990s. It has good durability, a simple texture, and harmony with traditional buildings, and the price is reasonable. 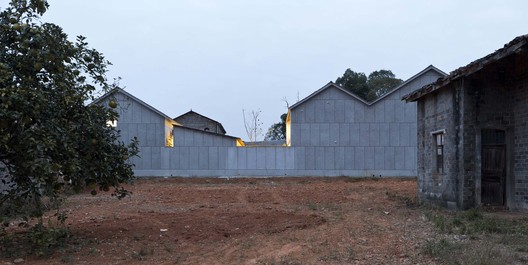