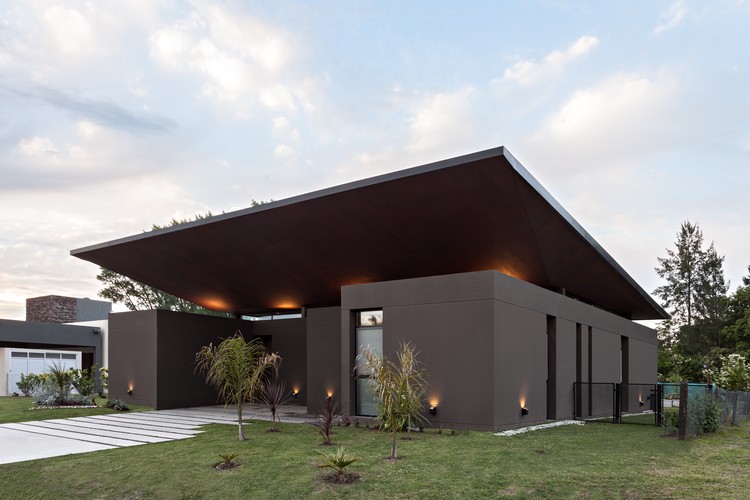 Text description provided by the architects. October is being born With its clear mornings. I have left my bed remembering the song that I sang at dawn; my plants and the dog, Free, naked, play. Coffee on the table, A little sleepy, sixty is no longer like being thirty. The sun that is rising Has found some clouds, The roof sounds with a slight drizzle, memories of Ezequiel and Alfredo, love; I open the windows and spring has brought me its sun on the thin wings of the wind. The sun falls sweetly staining the memories orange, I hear voices approaching to light the stove, the night far away ...

The Delia house, located in a closed neighborhood of Moreno, Buenos Aires; designed to respond to physical and symbolic needs raised in the order. Physical necessity, a flexible and open space where one person lives and at the same time has the duality of constantly hosting many guests. Symbolic necessity, a rich space in terms of a sensitive and reflective dwelling for Delia.

There is a large continuous room, in order to characterize each activity in the house, this space is organized from four elements carefully arranged in relation to other physical or imaginary that are vestiges of Delia's life.

The thought spaces never sought to be a neutral or technical operation, on the contrary, the material and symbolic occupation of the space in the house can be conceived as the struggle for the power to assign meanings (discourses) to the material elements and objects. In this tension, more or less secret between the different discourses that dispute the meaning of spaces, nests the political dimension of living in the Delia house.

Life unfolds within a ring around the fully glazed central courtyard, colonized by a garden that organizes and articulates the different uses. A continuous metal roof that covers the entire extension of the plant, inside covered in wood phenolics, generates a contrast of light, color, and texture with the rest of the exterior that tries to pass to an austere plane. At the same time, it floats thanks to a glazed gap on four volumes on its front that are in contact with the ground, two of them surround the side faces, and form an envelope that embraces the large central interior space; leaving an open space towards the bottom where it culminates in a gallery with a total opening to the private park.

A spatial sequence is proposed in the transition from public to private space. The visitor is invited through a large roof that at the access presents its largest scale, to then access the most secret and intimate part of the house. On the way to the entry point through the slope of the roof and the terrain, the spatial relationship begins to provide greater intimacy, continuing the sequence, once inside the patio becomes the protagonist, then all the spaces of the house can be observed connected to each other.