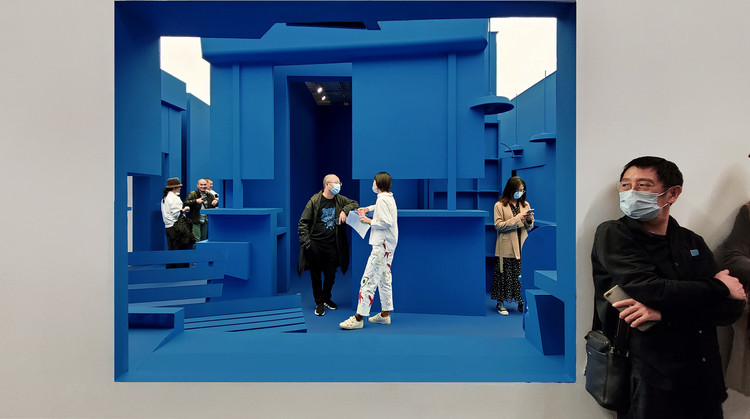 Foundational to the art practices of “Polit-Sheer-Form Office” (PSFO),  thoughts on collectivism are also not alien to architecture and graphic design. The space that architect Wang Zigeng created for the exhibition is akin to “Mr. Zheng” , a portrait montage of core members of the Polit-Sheer-Form Office. The exhibition hall in the form of a "tube-shaped apartment”  features a waterhouse, a canteen, a screening room, a barber shop and a bathhouse. Five collectivist spatial forms are mixedalong the corridors. Here meet the abstract space, artifacts and living memories; reality and distant history are dreamily combined. One has to pass through the blue space of déjà vu and jamais vu, to expand the meanings of the exhibition.——Curator, Cancan Cui

Nine-Tiered Pagoda and PSFO
Nine-Tiered Pagoda: Spatial and Visual Magic consists of nine different forms of exhibition. Nine (groups of) artists provide their works as the basis for the exhibition. Besides, nine architects and nine designers also join to form nine temporary teams, hence the cooperation among artists, architects and designers. There is no ‘priority’ or ‘center’ in the exhibition, but division of labor and collaboration, presenting nine individual exhibitions of a brand-new type.

As the first project of Nine-Tiered Pagoda, the exhibition “Unity is Strength” invites  architect Wang Zigeng to create the exhibition space and graphic designer Liu Zhizhi to take charge of visual designs, based on the works of “Polit-Sheer-Form Office (PSFO)”.

Polit-Sheer-Form Office, or PSFO for short, is an art collective founded by artists Hong Hao, Xiao Yu, Song Dong, Liu Jianhua, and Leng Lin in 2005. Facing the real world and focusing on the construction of the spiritual world, PSFO transforms daily political, cultural, economic life into purified forms, blurring boundaries in between. By developing thoughts, discussions, footprints, pleasures and ideas into forms, the “Polit Sheer Form” has thus been constructed.

Déjà vu and jamais vu
PSFO's works are diverse in form and focus on collectivist forms that abstract away from the political content and core values. Taking the "Polit-Sheer-Blue" as the group’s characteristic color, their works are continuously blurring the boundary between the individual and the collective, standing for the value of superposition and symbiosis.

In this exhibition, PSFO presents six oil paintings, two films, five bookshelf installations, and a digital composite portrait Mr. Zheng. Mr. Zheng is a digital composite portrait of the group’s five members, which is the personification of PSFO’s idea that ‘We become I’. The exhibition proposal responds to Mr. Zheng with a collage of five typical collectivist spaces (waterhouse, canteen, screening room, barber shop, and bathhouse), creating a blue tube-shaped space that could adapt to PSFO’s artworks in diverse medium.

In this blue corridor, five different collectivist spatial elements are extracted and juxtaposed to each other. Different buildings and artifacts are juxtapose to create coincidents and relations, forming a new "species". Parallel mirrors are set at both ends of the corridor, generating the visual illusion of infinite extension within the limited space and a playground of forms accommodating detached contents.

The blue walls extending outwards guide the visitors to the blue tube-shaped space inside, where collectivist living objects and spaces are superimposed and compounded in different coordinate systems in an abstract form while the color of “Polit-Sheer-Blue” unifies them into a new whole. The entrance of the exhibition hall could also be viewed as a section to display the "layers" of the superimposed walls to the audience.

The size of windows between the exhibition space and the blue corridor is similar to the size of the six canvases exhibited by PSFO. The windows are arranged on the walls parallel to each other, thus they become the new canvases for the "framed sceneries", creating a connection and tension between the space and the paintings on the shelves. The design of windows simultaneously removes the abstract additions from the blue walls, displaying the objects in the form of section. The entrance and exit of the gallery are lifted from the wall as secret doors, maintaining formal consistency on both sides of the wall.

We concentrate architects’ interpretation of the artworks and their own design works in the corridor, creating a dialogue between the exhibition space and the architect's creation. The two ends of the corridors are covered with mirrors, visually extending the space to infinity. A series of symbols of collective memory are spread out in abstract forms. Different combinations of the symbols create a paradoxical experience, bringing the audiences into a past that seems to have been experienced, as well as into a dream that has not been experienced.

Nine-Tiered Pagoda: Spatial and Visual Magic, as a cross-disciplinary event, represents an unprecedented direction and form of exhibition in China.  Nine (groups of) artists provide their works as the basis for the exhibition. Besides, nine architects and nine designers will also join to form nine temporary teams, hence the cooperation among artists, architects and designers. There is no ‘priority’ or ‘center’ in the exhibition, but division of labor and collaboration, presenting nine individual exhibitions of a brand-new type.

As the first project of Nine-Tiered Pagoda, “Unity is Strength” is an awakening voice showcasing the values and openness of the collaboration among nine groups of artists, architects and designers. The exhibition is based on the works of Polit-Sheer-Form Office, with architect Wang Zigeng creating the space and graphic designer Liu Zhizhi taking in charge of posters and other visual designs. 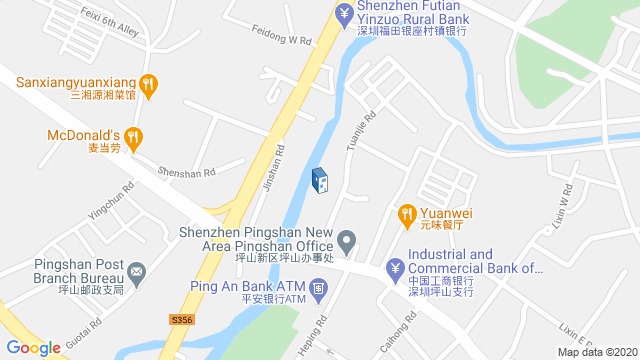 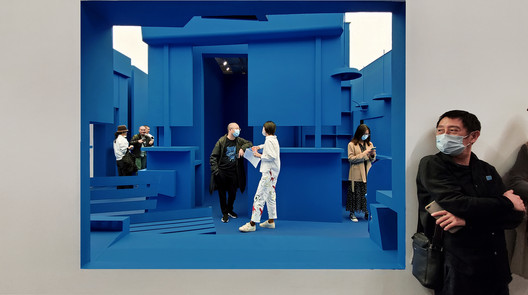