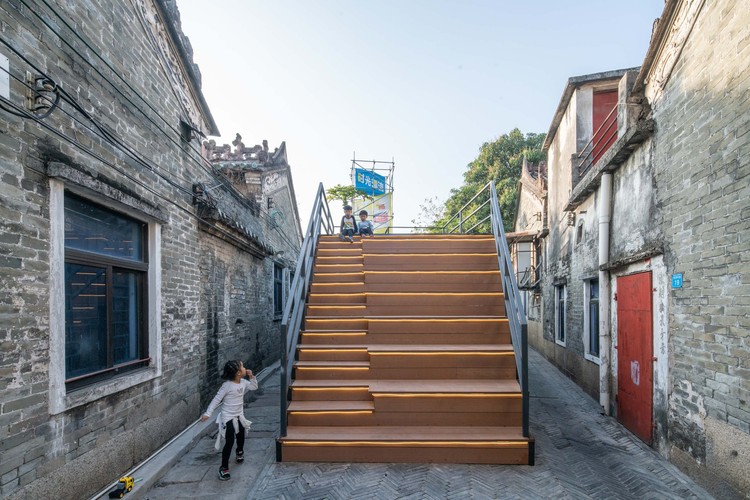 In order to preserve the historical and cultural values of Shajing Fair, and to explore a model of urban renewal and urban value regeneration, ARCity Office was commissioned by Shajing Street Office and China Resources Land Limited to design a set of landscape/buildings/interior reconstruction projects. At the same time, ARCity Office curated "Time Drift -Shajing Relic Reborn urban site-specfic exhibition" and organized various public activities for villagers to help them discover the unique aesthetic value of historical remains. Through these creative designs and exhibitions,architects aim to create new cultural integration scenes, and activate local communities which are in a state of decay. The entire processes of planning, design, curation and exhibition began in early September 2019 and was fully completed by the end of December 2019.

Rejuvenation of Shajing Ancient Fair
Rejuvenation of Shajing Ancient Fair is an urban micro-regeneration project which include river management, landscape design, architecture and interior design. The main task is to redesign the landscape of a section of the Longjin River which is about 70 meters. At the same time, important sites (such as ruins, old houses, theatres, etc.) were selected and redesigned by an approach of “fusion design”. In this way, architects increase the heterogeneity of the site and maintain spatial textures to activate the entire area.

Landscape of the Longjin Riverbank - a low-cost way to revive a polluted ancient river
Longjin River was once essential for trade and transportation. Later on, due to the decline of Shajing, the river channel was gradually filled in, narrowed and polluted , turning into a 2-meter wide odorous gutter. Architects adopt a low-cost rain and sewage diversion strategy to divide the channel into two layers. The lower layer is sewage, and the upper is rainwater. Thus, when there is no rainwater, the upper one can be filled by reclaiming filtered water from nearby sewage plant.

Further, a set of flower ponds, seats, bridges, and walking paths were designed to revitalize the Longjin River by removing the railings on both sides of the river bank. The space of river bank was returned the public. As a result, this site was able to contain daily life and become a scene that people could get close to enjoy and experience.

The roads on the side of Longjin river are completely squeezed to the river's edge, and the phenomenon of "road competition for the river" is rampant. Even so, the road is still in a haphazard state, with cars, motorcycles, battery-powered vehicles, and pedestrians mingling with each other, making traffic efficiency low. In this regard, the design proposed a balanced solution: the redesign of the road line, the use of "road cutting" method, the road line appropriate curves, some unnecessary road width to reduce the narrowing of the river, to return to the water bodies and riverbank landscape, road bottlenecks are properly widened.

The boundaries of the road were redesigned to provide additional space for landscaping and ornamental recreation. Cantilevered flower pools, beauty seats and bridges over the river were designed to enrich the riverbank landscape. Further, the elevation of the additional space was lowered below the ground level to visually widen the width of the river.

In the past, the Longjin River used to be 5-10 meters wide. But then the river became blocked, and roads and houses occupied the river. For this reason, architects chose several sites to increase the width of the water body appropriately; and designed water-friendly steps where people can play at the river's edge to experience the river's original charm.

Longjin Viewing Pavilion - Designing a location with a visible view
If Shajing Ancient Fair could be seen as a large, open "museum of historical scenes", in order to achieve a promenade architecturale, it is necessary to design unique paths and viewing places that allow people to discover the beauty of the historical heritage unobtrusively. Architects believe that designing a location with a visible view is perhaps more important than designing the landscape itself. One such site is the Longjin Pavilion, which is located by a bridge over the Longjin River. People can watch scenery of the river of both sides here, and the place has become a tiny place for villagers to rest and socialize casually.

Public Stage - activating local cultural heritage with public space
Shajing Ancient Fair has rich historical and cultural heritage. Shajing was one of the four major bazaars in Shenzhen 200 years ago, the Oyster Town of the Pearl River Delta, and the original place of Cantonese opera and mantis fist martial arts. But due to the decline of the entire region, these traditional cultures have also declined. The architects hope to revive the local cultural heritage through the restoration, transformation and creation of a series of public spaces. One of the important places is the public stage. Built in the 1980s, this building has gradually become a useless fire station. Architects redesigned this building by collecting some old wood and bricks from the local area for interior decoration and flooring.Thus, a complex sense of history has been created and villagers can organize activities here.

Ruin Garden- A Skyway Bridge System
There is a building ruin near the pulbic stage, and after a period of time some residents grow vegetables here. Architects used the roof of the public toilet beside the ruins to construct a sky bridge system, including a large staircase, a skywalk, a Scaffolding poster towers, etc., People are allowed to walk up to the second-story elevation and get a closer look at the historic buildings, including two shrines and a home school. At the same time, the small open space on the side of the ruins was utilized and transformed into an outdoor plaza with wooden planks where villagers can sit and relax or engage in small social and sporting activities,such as practicing mantis boxing

House of Gable Wall - Discover and create the theatricality of everyday life
The hexagonal pavilion square near the Longjin River waterlock is one of the core areas of this project. There are many historical sites here, including the Hexagonal Pavilion, the ancient arch, the ruins of the official salt yamen of the Southern Song Dynasty, the ancient wells of Weitou, and the Guanyin Temple. It is also a place for local villagers for relaxing and gathering. The architects chose an old house (mahjong parlor on the first floor and residence on the second floor) directly opposite to the Hexagon Pavilion to redesign the gable wall to create a new dramatic place. The gable wall is made of black perforated aluminum panels (40mm diameter holes), which are detached from the original façade of the old house.

Old House Gallery - a fusion of the cubic pixel space and the old building
The fusion of abstract grid space and cubic pixel space with historical spaces is a commonly used design approach of ARCity Office. The project experiments with a vacant old house by adding a cubic pixel system (black patterned steel + transparent white acrylic) at the entrance of the house and extending it into the interior. The system is adaptable, like a kind of building infrastructure, so that screens, projections, lights, and other equipment can be freely installed in the building to accommodate high-density media information without changing the original state of the building.

Time may be the most precious, luxurious and charming consumer products in the modern society. Because time is not only the mutual silhouette of the whole world, but also the minimum unit of embodied cognition. Time Drift is a group event which condenses numerous moments and carries the meaning of a kind of unavoidable decay in all places. But rejuvenation is the most dramatic intrinsic energy in life which can wake everyone up and take them to unpredictable future scenarios. In this way, all kinds of urban and rural scenarios will repeat.

On one hand, the ongoing events at Shajing Fair are connected to the past but more relevant to the future. A sudden exhibition will start at the extremely prosaic stream which represents daily life - like a heavy rain that caused a flood. On the other hand, information is becoming the real stream where every individual lives. So the ‘on-site urban exhibition’ which contains abundant different information is not only a usual exhibition, but also an innovative experiment of urban scenarios.

The spatial-temporal heterogeneity of Shajing is being reshaped and may make Shajing a singularity in the global information network. This process relies on a brand new strategy called "urban curation", which completely integrates information and scenes, space and contents, economy and society, virtual and reality, history and future, nature and humanities to create the unique value of spatial-temporal fusion.

We try to use ‘urban curation’ to redefine ‘urban renewal’ in this exhibition. At this moment, we choose Shajing simply because she also chooses us. The elapsed time leaves muti-layer traces here while the old path of Longjin River still exists. Time Drift is like a journey of exploration. On this journey, time will guide us to experience the spatial-temporal tunnel. What kind of miraculous scenery we will encounter here? Come to Shajing and explore the beauty and of time!

Time Drift - Rejuvenation of Shajing Ancient Fair site-specific exhibition is both a design and an exhibition, a kind of preservation and activation, a landscape and a view, a renewal and a nostalgia, a daily life and a drama ...... It combines various elements, attempting to bring together past and future, history and contemporary, local and distant, to form a city full of theories and ideas of the past and the present. The state of the scene in spatiotemporal tension. As a new spatial value model experiment, which may have just begun, we also expect the manhole ancient ruins to start a slow but profound spatio-temporal evolutionary journey because of this experimental action. 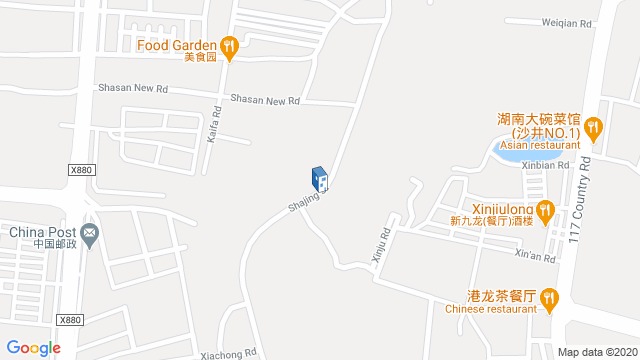 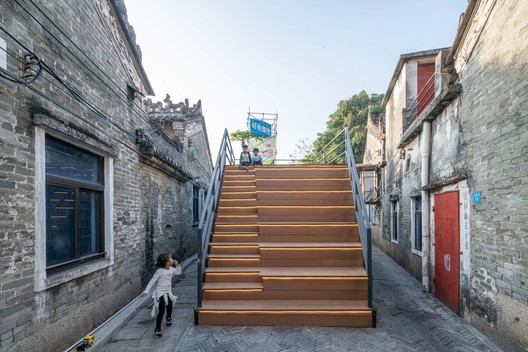