"What Are We Talking About When We Talk about Contemporary Cuban Architecture?" is the title of the article written by Fernando Martirena in Rialta Magazine that delves into the reality of architecture within Cuban society. Essentially, it receives so little attention that it might as well not exist. This prompted the birth of the Cuban Architecture Studios Group (Grupo de Estudios Cubanos de Arquitectura), of which Martirena is a member, a collective that aims to give modern Cuban architecture a platform and a voice.

ArchDaily sat down with Martirena to talk about the group and the state of architecture today in his native Cuba.

Fabian Dejtiar (FD): Can you tell us more about the creation of the Cuban Architecture Studios Group? What was the inspiration behind it?

Fernando Martirena (FM): My generation and the one before us were lucky enough to witness the rebirth of our national architecture at the hand of increasing private enterprise. Our area of work is the one that has benefited most from this economic change on the island. It took us nearly 10 years to embrace our differences within this marriage of convenience, whose principal objective was to regulate the profession and bring this new architecture into the spotlight.

GECA's mission was conceived in a WhatsApp group where all of us shared our opinions on the future that we hoped to see. Come to find out, we shared many of the same visions and dreams and, two years after, we continue to build on this common ground. As a group we've organized expos, presentations, publications, conferences, studio visits; however, few people have taken a real interest in our work as architects.

FD: You mentioned this in your article “Contemporary Cuban Architecture is Not a Topic of Conversation.” Could you explain why it isn't?

FM: In the years following the Cuban Revolution in 1958, architecture played a key role in addressing issues of housing, most of which were resolved during the first decade. Afterwards, in the 70s, the political system and the use of prefabricated building materials greatly reduced and restricted the private work and impact of architects. From 1971 to 2011 there was a void in our architectural history that reflected the role of custom architecture in society at the time. That is, it was no longer necessary. If anything, it was considered to be the remnants of bygone bourgeois bad taste. Today, contemporary Cuban architecture is nearly nonexistent and totally lawless. Cubans themselves are unaware that there are architects currently at work on a variety of interesting projects. The legality of the work and the silence surrounding it prevents it from receiving attention. After all, you can't discuss something you are even aware exists.

FD: Today, you have your practice Infraestudio. What is it like working in architecture in Cuba?

FM: Our studio works within a context that scoffs at the binary and creates a collision between private ambitions and public conditions. This unofficial and unregulated status of our private work, along with the lack of resources, in many ways gives us a large blank canvas to work with and even frees us from pre-set norms.

On the other hand, as architects, our ambition to create spatial concepts. Unfortunately, the only way we are able to legally do this is working under the guise of party decorators; however, having to work within this absurd context has allowed us to expand the limits of architecture as a discipline and to forge connections between our profession and literature and visual arts.

FD: From the point of view the Cuban educational system, would you say that there is a gap between academia and the professional practice of architecture? What advice would you give to architectural students?

FM: Despite various attempts by our group, academia still refuses to engage with private architectural practices. With the university, private enterprise is still considered taboo and academics prefer to adopt an evasive stance that neglects to teach or even mention the realities of working in the field.

Obviously, there are exceptions but only a small quantity of students keep abreast of what goes on in the field of architecture beyond the university's walls.

To students, I recommend that they have a clear understanding of the context that they live in while also being able to distance themselves from their immediate reality and to look at it from the outside. They should be able to decide their own limits of perspective and not remain trapped in localist and determinist ideas. They should attempt to blur the line between impossible and possible in order to make the impossible happen.

FD: What projections do have for the future of architecture in Cuba?

FM: As an optimist, I imagine a future where architecture and those who study and practice it have a legitimate and recognized role in society. I imagine a city that welcomes public contests and that promotes public participation in the conversation surrounding our national architecture. If this is asking too much, I would be content to see a unified architectural guild that is willing to work within independent architecture, one that starts small and then eventually reaches international scale. 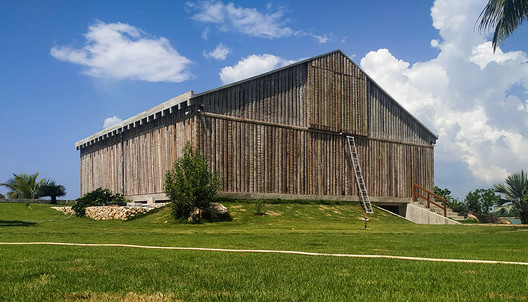