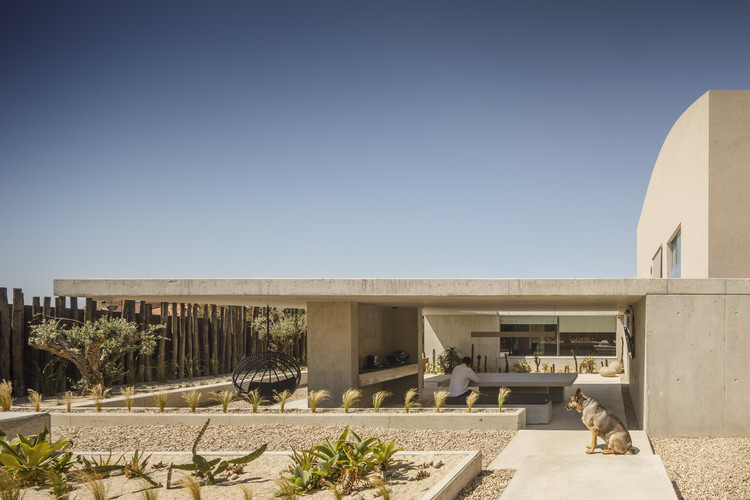 “A downward topography gesture facing west, contemplating the valley underlined on the horizon by the Serra da Estrela and Caramulo mountain.” That’s the scenario in which this project emerges, in a sequence of overlaid volumes insuperable in its monolithic character, but still permeable within, defining exterior spaces intrinsic to the indoor space.

The concept guideline revolves around this frame whose geometry was homogenized in a single mass only to be opened in a thin vertical gap, highlighting the entrance.

This verticality is also found in the living room unfolding into an uninterrupted indoor height though the floors. This allows for the living room to be contemplated from the study and guest room both upstairs.

Around the pre-existence of concrete sheets, which create covered living areas around vegetative patios, providing different moments of living and dining areas to the east.

This main structure is also embraced by another volume containing the juxtaposed main suite. The front of the main suite extends into a western living space, permeable by the vegetative patios, ending in an area to relax in bed and to be around a fire.

The latter is crowned by a longitudinal concrete platform whose pool and water mirror shelter the garage at the lower level.