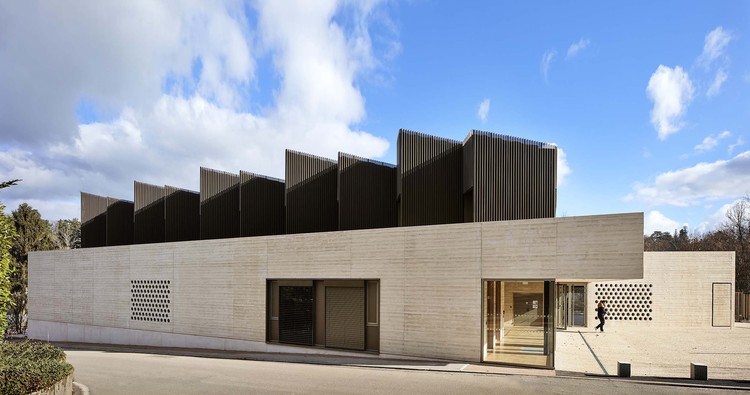 Text description provided by the architects. The Maison des Arts arts centre is a new public facility in Charbonnières-les-Bains, a residential town to the west of Lyon. It is situated in the valley of a small river which runs through the town, along the railway line. The setting is green and leafy, with just a few sparse buildings surrounded by gardens. The building blends into the site harmoniously. It is a generous project with careful attention paid to all four sides. It is also a solitary object which dialogues with its setting on all sides and through its overall silhouette.

A hybrid structure.  The project’s architecture is characterised by the tandem structure. The base, massive and mineral, which follows and absorbs the slope; and the perforated metal roof which stands out against the sky like a light, delicate headdress. The concrete and metal play on the contrast between opacity and transparency, light and weight, light masses, and dark surfaces. The materials are raw and uncompromising. Everything is visible and reveals the perfect coherence between the exterior and interior, between the architectural image and the means of production.

This building is part of a new generation of projects built by Tectoniques. In the continuity of the work already undertaken, certain key points such as the materials, the relationship to the ground, the depth and the construction have been developed to make use of systems that are different from those the architects are known for, in particular “all-wood” building solutions.

A remarkable but constrained site.  The Maison des Arts is situated in a residential neighbourhood, surrounded by villas with large gardens and swathes of trees. However, the selected plot has a number of significant constraints. It is located on a narrow strip between the road (Chemin de la Ferrière) and the railway line. This unexpected backdrop of rails, masts, cables, and overhead lines jars with the leafy landscape surrounding the project. The other major difficulty was the steep slope of the land.

The relative isolation of the building is compensated for by its proximity to other facilities: the town hall, the library, the nursery and primary schools, and the stadium, all situated on the other side of the valley and easily, as well as safely, accessible. The river valley, below the railway line, is a popular walk with residents, along a path which leads to the cinema, then on to the station and central town square. The architects were able to work around the original site which, as well as its limitations, has a number of considerable assets.

A project built into the slope. The first objective was to make use of the steep slope of the land by using the height difference to integrate part of the programme into the incline. The programme is divided into two: the Maison des Jeunes (youth centre) and the Maison des Arts (arts centre). The former is composed of two large halls dedicated to clubs and associations which operates independently of the rest of the building. It is integrated into the space created when excavating the site, with its own entrance to the north, close to the skatepark. The latter conserves its own access to the south on the upper level, opposite the esplanade and landscaped car park.

One on top of another.  From a building perspective, the concrete base serves to absorb the topography and acoustically isolate the facility from the noise of the railway. It uses two very distinct styles. The lower section is smooth. The upper section is formed with a matrix of wooden boards, a nod to Tectoniques’ material of choice. The material used for the base is very fluid concrete, poured and formed in situ, which uses dyed white cement to give a milky, ochre-tinted appearance.

The structure is visually both raw and delicate. The materials are unfinished but the precision of their implementation and the composition of the mix means the final result tends towards more refined materiality. The concrete is also enhanced by the use made of its thickness and mass. For example, the series of circular holes drilled into the facade to let light into the building, the inscription engraved on the south facade, and the intriguing emergency exit door made of concrete.