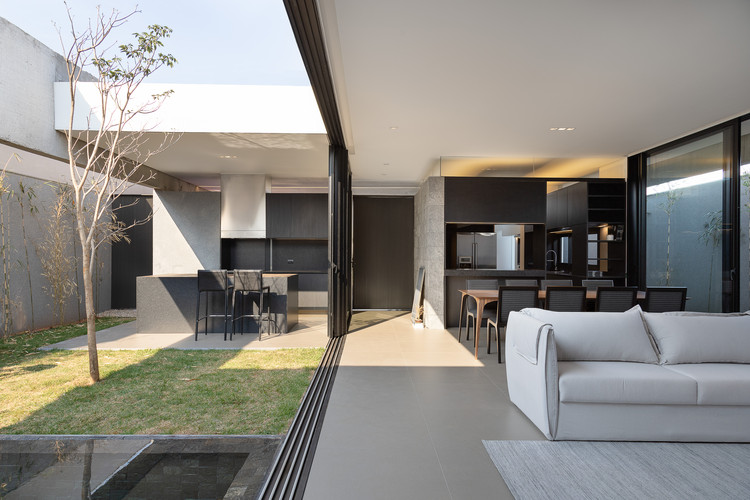 Text description provided by the architects. With an area of 220m², the project organizes social, private and service space under a single cover. Two perimeter beams, longitudinal, in reinforced concrete, lead the structure to the ends that, resting on 4 pillars, allow untying between roof and block. The sparse configuration creates the possibility for zenith lighting and integral cross ventilation while the aerial section of one of the beams that crosses the central atrium, blocks direct sunlight to the living environments, allows for sunshine in the pool and garden.

The atrium, placed as an interlocutor between the project's programs, absorbs the permeability of the areas, decompressing the dense integration in a plot with an area of 360m². The layout of the house's compartments are interposed by the living area and connected by central and lateral accesses allowing unobstructed path through all areas, filled or idle. There is a concern to dismantle the limits between building and lot, reconfiguring the permeable areas and taking the landscape to the final itinerary of the residence.

The materiality printed in the house leads the general context to the uniqueness, enabling dialogue between the elements and discontinuing the spaces with delicacy. The apparent concrete of the structure rests on a block of miracema stones and on gray metallic panels, allowing clarity in the perception of architectural elements and how they behave within the integrality of the project.