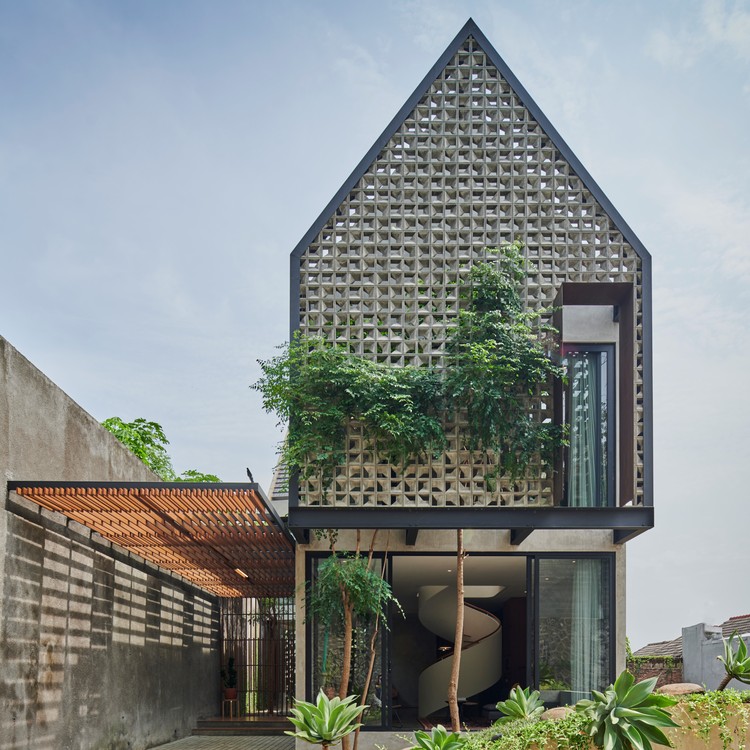 Text description provided by the architects. The house is located at the furthest edge of a matured residential neighborhood in a hilly area of Semarang, Indonesia. The site is bordered by tall retaining walls that act as boundary of the neighborhood on two of its sides along with wild vegetation behind them. The wall became the defining point of the early design process of the project. Instead of covering the wall with the massing of the house, the house was built away from the wall creating a small courtyard in-between the wall and the house.

The wall was then re-presented in a fresh way, as it became an important element that established the meaning of the inner courtyard. The courtyard was further defined by the floating massing of the second floor that gave shelter to the back part of the courtyard creating a comfortable outdoor space that feels like an indoor space at the same time.

Amidst the house’s simple programs, a spiral staircase was placed in the middle of the house unifying the spaces in the house rather than breaking them apart. It became a sculptural element of the house that created a sense of movement through the interior space of the house making the house more energetic.

The form of the house takes the shape of a steeply angled roof creating an A-frame with a secondary skin made out of custom-designed cement breeze blocks as its façade along with protruded Corten frames around series of opening throughout the house. Besides acting as a passive cooling strategy, the breeze blocks also served to reduce visual connection from outside to inside maintaining privacy within the house.

Natural elements also took a significant part of the façade as a couple of trees were placed in the in-between space so its branches and leaves grew out through the breeze blocks’ small openings making the façade constantly changing with the naturally growing trees. The present of the trees that were physically intertwined with the architecture of the house gave a dynamic character and a lively energy to the house.