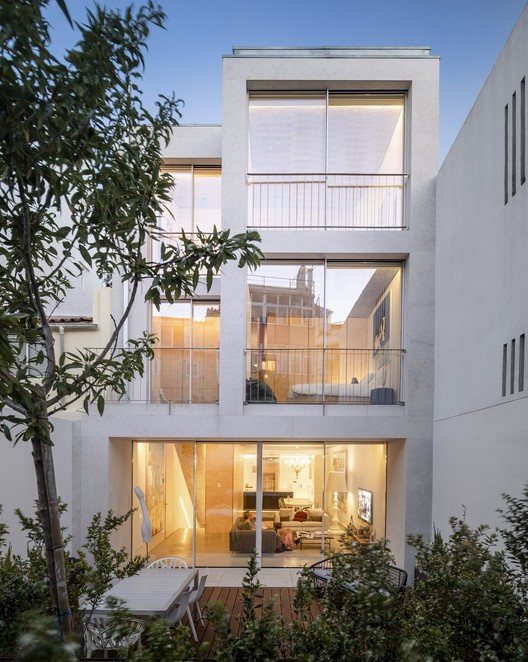 Text description provided by the architects. The project states the profound reformulation of a building of 4 apartments located on Rua do Olival, in Lisbon, transforming it into a single-family house. From the pre-existence, due to the imposition of the council, the main façade was maintained, with the rest of the building being entirely new. It was thus decided to take advantage of the juxtaposition of two different times, apparent in the original architecture present on the facade and that of a new interior that is admittedly contemporary, establishing a different dialogue between these two moments, expressive both inside and outside.

In terms of façade, this dialogue is evidenced by the hidden placement of the new single-glazed frames which, when drawn back to the interior face of the wall, produce deep, contemporary spans, but which underline the great thickness of the original walls. On the posterior façade, the language is admittedly contemporary, consisting of large glazing that underline the visual relationship with the garden patio.

Inside, the interior spatial structure results from the interpretation of the housing program, with the lower floors having social areas, with extension to the garden, and the private areas on the upper floors, with visual threading to the Tagus River. In terms of design concept, a kind of central volume in plywood organizes vertical communications, accommodates cabinets and bathrooms and defines the limits of the main spaces organized along the two opposite facades.

If the dialogue between different times manifests itself mainly in the resolution of the gaps between the dimensions of the spans of the facade and the floors, generating singular situations, in tectonic terms an informal contemporaneity is affirmed, either through the exposed concrete ceilings of singular texture granted by formwork on OSB panels or sanded concrete floors.