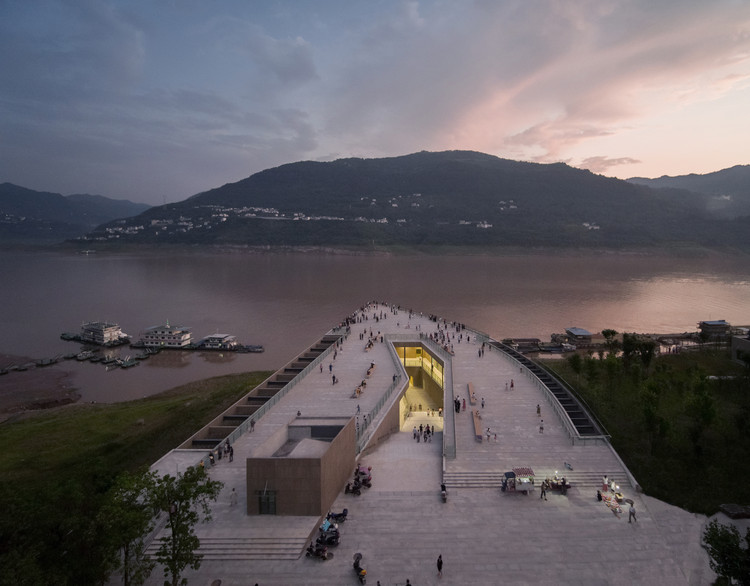 Text description provided by the architects. Yunyang is located in the hinterland of the Three Gorges Dam area in Chongqing, and the county sits on the southern slope of Longji Ridge north to the Yangtzi River. A visitor center was planned along the riverfront greenbelt to serve the citizens for leisure. The client wanted to fill up the small bay down the Yunyang Port and reclaim it as the site for the project. In contrast to the grand Yangtzi River, the tranquil bay has a unique landscape character. Its north, east and downstream shores are natural cliffs falling straight into the water, while the greenbelt down the bay was to be put on top of the cliff. The west and upstream shores are slopes leading into the water, currently being transformed into engineered river bank and revetment, where the greenbelt upstream will be placed in the future. According to the building scheme, the embankment construction would stretch almost straight from the upstream all the way down to the east-side cliff of the bay. The connection between the bay and the river would thus be cut off, and the bay would turn into stagnant water, if not to be filled up. As the river bank extends to the cliff, the greenbelt on the bank is still more than ten meters lower than that on top of the cliff, which also makes it difficult to bridge the two.

The design seeks to preserve the bay, and locate the visitor center on its west shore. The building stands as a finish to the new embankment, as well as continuing the cliff, straight towards the river till the revetment, encircling the bay while completing the embankment construction.

The building volume protruding the river bank turns into a complete void, forming a lower level plaza capped at the exact height of the bank, as the termination of the greenbelt. The plaza connects to the green belt on the cliff with an exterior staircase, both sides of which are used as general service space. The cap and the roof of the service space together form an upper level plaza, as the starting point of the greenbelt on top of the cliff. The height transition of the belt from the bank to the cliff is thus completed with the visitor center, and the architecture gains significant publicity on account of the belt going through the building as a public open space.

Across the river facing the site is a ridge with an almost symmetrical figure. The solid body of the mountain gives off a strong sense of monumentality against the river. The river at far presents a picturesque scene, merging into colors of blue and grey with the filtration of vapour. The plan figure of the visitor center is abstracted from the flow of the cliff and the roads nearby, almost as an isosceles triangle, vertex pointing to the ridge across, defining a clear orientation for the architectural volume.

The exterior emphasizes geometrical pureness, bringing distinct visual characteristics. The abstractness of the geometrical form empowers the architecture with adequate strength, keeping it equivalent to the grand river to some extent, highlighting the publicity it ought to have as a “major element” of the city.

The upper level plaza opens to the air on three sides, prominently located on top of the revetment, heading towards the axis of the ridge across the river, building up relevance on the order level. The openness of the plaza allows citizens to be bathed in the sublime of the landscape across, presenting the impressive river to the fullest. With a depth of nearly a hundred meters, the plaza provides a ceremonial marching experience towards the ridge, further enhancing the monumentality of the landscape. The cap of the lower level plaza and its support forms an enormous frame, covering most of the sky, and guiding the view towards the hazy river and mountains on both sides up and down the stream, stressing the picturesque scenery of the dam area.

The site sits at the intersection of natural and man-made environments, resulting in a complex and even confusing meaning. The architecture restores the order by repositioning and integrating conflicted spatial elements, thus it connects with the site on the physical level. The landscape of the river and the mountains has diverse aesthetic values when observed at different distances. The visitor center provides correspondent viewing spaces with diverse atmospheres, to connect with the landscape on the experience level. The architecture stresses its expression as an artifact and brings up subtle tension with the river and the city, structuring a metaphysical connection with them. With these layers of connections, the Yunyang Riverfront Visitor Center completes its interpretation of the surroundings, and achieves its own being eventually. 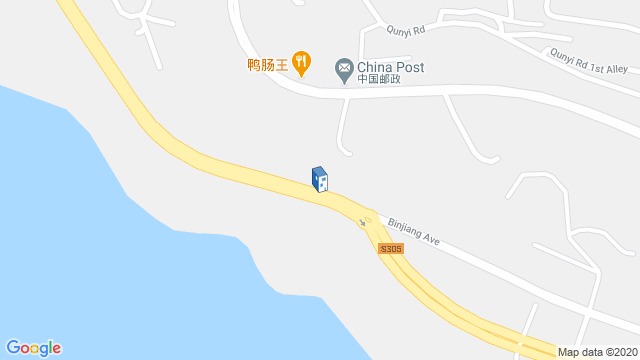 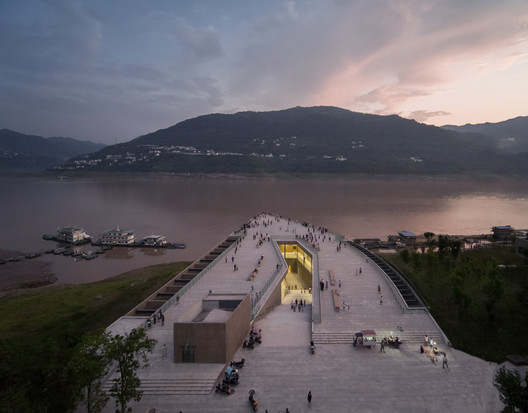