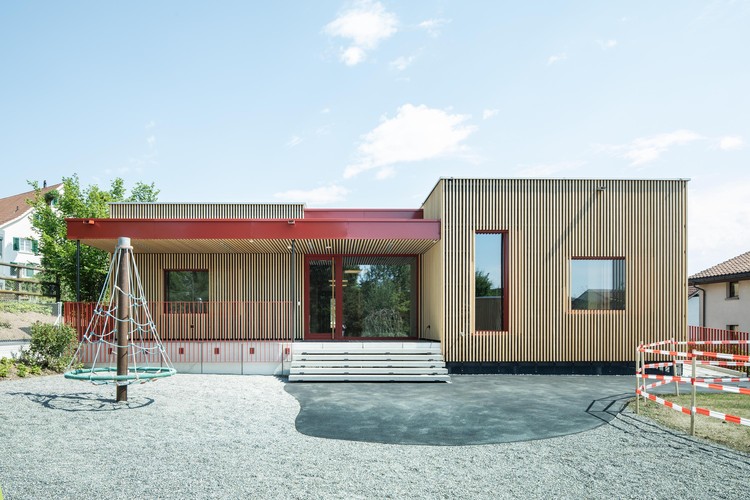 Text description provided by the architects. This unobtrusive modular timber structure is the first of three new buildings planned for the Wagerenhof Foundation in Uster. It accommodates a crèche, where inclusivity, tolerance, and instilling self-confidence are paramount. Differentiated interior and outdoor spaces create a reassuring and stimulating atmosphere for children with or without impairments from the age of three months until they start nursery school.

Part of the Wagerenhof. The foundation offers people with cognitive impairments a place to live in, which can be adapted to many different needs. The establishment, which has grown and developed over the decades, now has the character of a village. The crèche stands on the southern part of the site, fitting seamlessly into the overall layout. In order to integrate with the scale and grain of the surroundings, the building volume was differentiated into subordinate masses, which were expressed in the facade and the roof in a way that conferred an identity of its own.

Wood Meets Wood. Even at an early stage in the design process, it was clear that the crèche - given its proximity to the existing trees and the wooden facades of the neighbouring buildings - should be constructed of wood. Ramps and terraces form a gentle transition between the courtyard and the building, which appears to float above the ground. A ramp at the main entrance provides disabled access to the crèche, while the two partly covered terraces lead directly to the Fairy Garden and the playground, which are defined as separate spaces from the communal outdoor area of the Wagerenhof.

A Mini-Village in the Village. The crèche’s interior is organised like a miniature echo of the Wagerenhof’s village-style layout. Spaces with similar uses are combined to form independent volumes, which are positioned in a dynamic relationship to each other. The volumes define a multifunctional space between them, which is more than just a circulation area. It offers a variety of routes and opportunities to play. In addition, there are a kitchen and dining area, a workshop for painting, and cloakrooms. This clear spatial configuration opens up a variety of views within and out of the building, which can help the children to orientate themselves and provides the interior with plenty of natural light throughout the day.

Spaces for Play and Discovery. The interior is laid out as three separate zones of enclosed rooms (for play, sleep, and office work) around a communal space. This makes it possible to respond individually to the changing needs of different children in the course of the day. The playrooms can be closed off from one another or merged for joint activities, as required. The differently recessed facades form fully glazed indoor alcoves suitable for seating, which the children can play in and make their own. The different surfaces of the OSB panels, the finely grained spruce wood, and the uniform blue floor enliven the interior with a stimulating juxtaposition of visual and tactile properties. Orientation indoors is made easier by colour-coding in selected positions to signify particular uses. 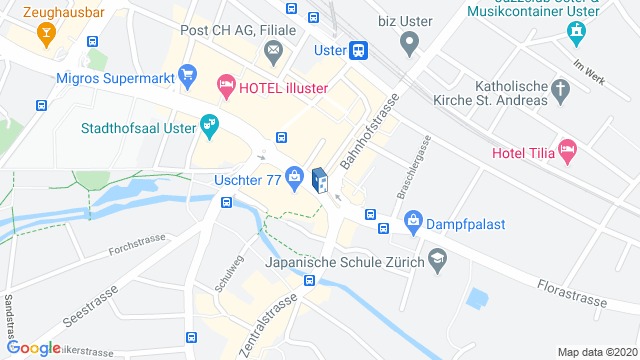 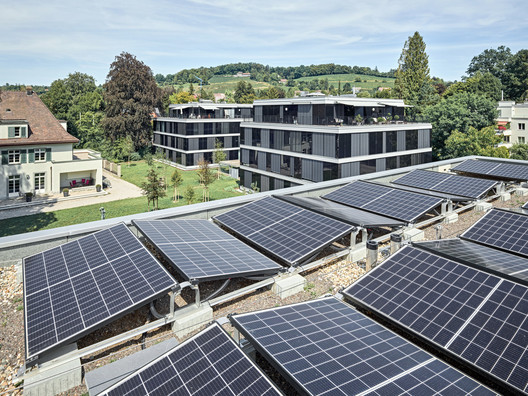