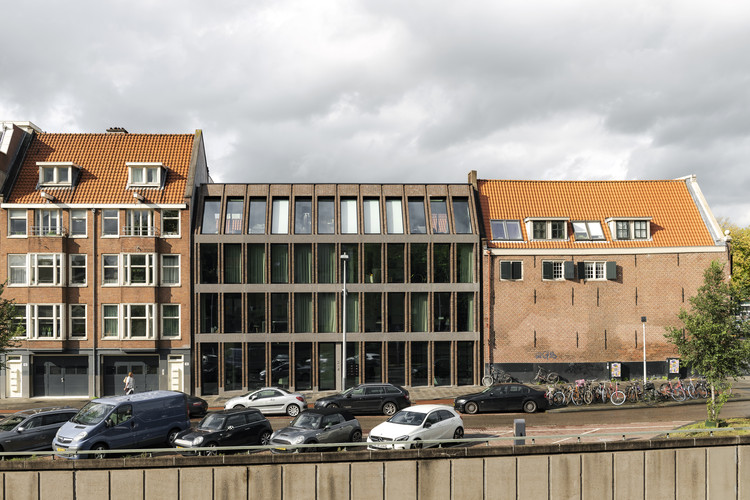 Text description provided by the architects. Where historic old Amsterdam and the modern city meet, Ronald Janssen Architecten has designed an imposing building that neither contrasts nor blends in with its surroundings. As you drive down busy Foeliestraat, you’ll notice nos. 2-4, but it won’t be immediately obvious that this is a residential building containing commercial space. Behind its robust brick grid, though, six apartments enjoy a panoramic view of the 16th-century city, anchored by the National Maritime Museum, without being disturbed by the traffic rushing past.

Embraced at the side and back by a warehouse built for the Dutch East India Company, the building inevitably respects its historical context. Among its slightly taller neighbours along Foeliestraat, its size and profile give it the appearance of a contemporary extension of the warehouse. Its horizontal concrete facade beams refer to the wooden ones on the historic building’s front. Meanwhile, the symmetrical construction and the grey-brown brick grid with its deep recesses, which continues over the roof all the way to the apex, present a unified gesture toward the busy thoroughfare.

The striking brick facade keeps out the traffic noise well enough to function as a sound barrier, making it possible for the one behind to be constructed largely of glass. The window frames are aligned with the brick grid in front, to hide them from view but also because glass keeps out sound better than aluminium frames. A more closed facade would have simplified compliance with building regulations, but Janssen deems natural light essential for occupants’ comfort, along with the ability to allow in the fresh air. Therefore, the glass facade is made up partially of sliding windows.

At ground level, commercial premises and a bicycle storage area extend the width of the plot. At the back, to permit daylight to enter the apartments and avoid building against the historic warehouse behind, a narrow patio has been constructed atop the first floor. All the bedrooms, some with balconies, face this quiet two-metre-wide outdoor space.

Foeliestraat 2-4’s decisiveness of gesture is matched by the care with which every detail has been thought out. The closer you get, the more you see. The house number is incorporated in the formwork into which the aggregate concrete has been poured. Bricks are laid as headers and stretchers. The brick facade is of a uniform height, though the ground slants; a plinth beneath the building subtly evens things out. It is raised at the entrance for the purpose of accentuation. The result is a solid and, on closer inspection, a refined residential building that carefully extricates itself from the intimate embrace of the warehouse without causing it to harm in the process. 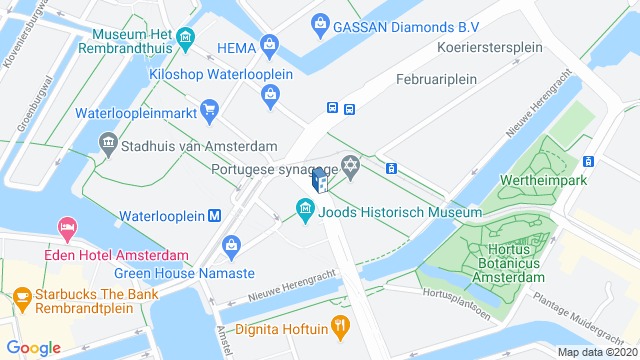 Location to be used only as a reference. It could indicate city/country but not exact address.
Share
Or
Copy
About this office
Ronald Janssen Architecten
Office
••• 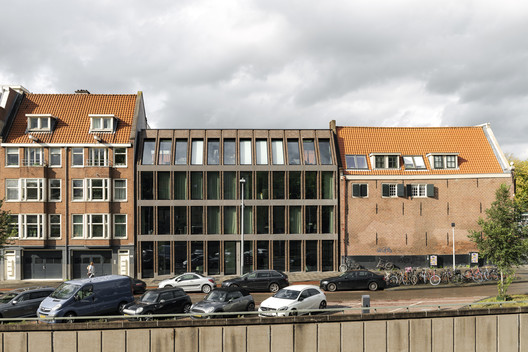