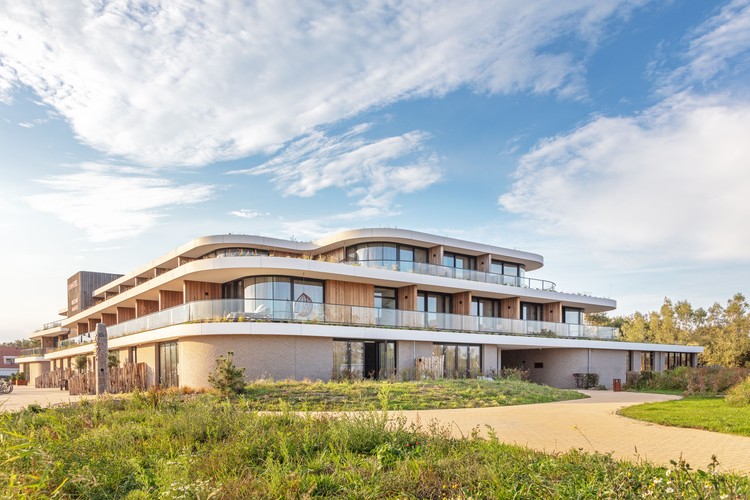 Text description provided by the architects. Atmospheric theme “The requirements for the project were considerable,” says Zwerus. “It was quite a challenge to satisfy the brief whilst respecting the natural surroundings.” The solution was found by allowing the building to merge into this environment. After all, the physical proximity to the water of the North Sea and the dune landscape that meets it is precisely why people looking for peace and quiet come to the Breezand holiday park. Zwerus: “Visitors come to Zeeland for fresh air, wind, sand, space, and a healthy atmosphere. The building should not remove visitors from that atmosphere, rather it should consolidate that atmosphere.

We wanted the sense of the dunes, wind, and space to continue into the hotel rooms.” Formed by the wind With this ambition in mind, Zwerus designed a building with rounded corners that draw on the dune landscape and feel as if – just like the dunes themselves – it was formed by the wind. Inside and outside are visually and physically connected almost everywhere in the building. Living greenery on every level of the outdoor space enhances the building’s natural elegance even more.

The design is characterised by muted materials, open, airy spaces, a large patio, and generous overhangs for sun and shade. Despite the organic forms, everything in the building is functional. For instance, the large, progressively more deeply recessed projections regulate the penetration of sunlight. “Everything, absolutely everything, has been considered,” says Zwerus. “Even possible other future functions.

At RoosRos, our aim is always to create multifunctional buildings. Long before the coronavirus crisis, we had considered that healthcare could work well in this building. But we haven’t developed that concept further, mind you. For now, it is and remains a very beautiful hotel.” Stimulated and challenged The hotel in this form not least came about through close collaboration with the structural engineers IMd, the contractor Bouwgroep Peters, and systems advisors M3E. But the most important partner in the development was the client Jan de Visser, on behalf of Breezand Vakanties. Zwerus explains: “Jan has the gift of being both very critical and full of trust. That produced a collaboration in which we stimulated and challenged one another, and that brought out the best in us. It was a dynamic process that taught us a lot, and we are all very proud of the result!” 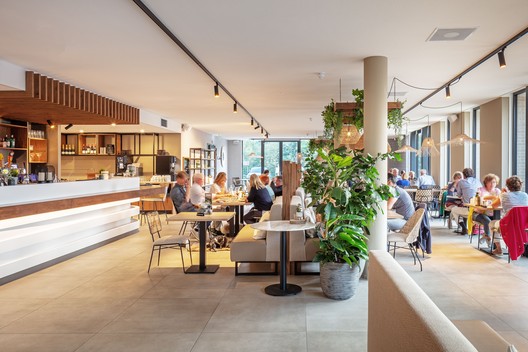