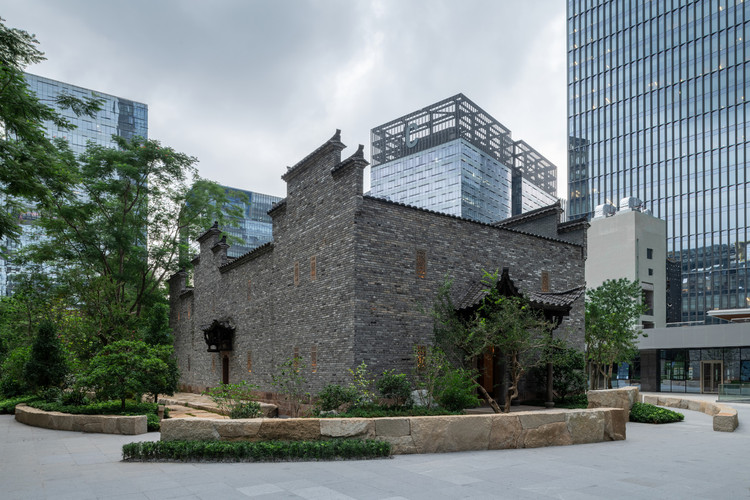 Project Narrative
Adjoin Garden, with an ancient architectural illusion, is located in the heart of Nanshan District, Shenzhen. Surrounded by modern high-rise buildings, it is situated on a multifunctional plaza integrating office, commerce, and leisure functions. The architectural part is a historic Qing Dynasty building with rich cultural meaning. The original facade and interior decoration of the building were preserved and moved to the city center, becoming a multifunctional site for various cultural activities.

The bricks, tiles, stones, and woods of the ancient buildings were disassembled and restored as they were, covering an area of about 258 square meters. This building has a brick and wood structure, featuring cornice cliffs, blue bricks, black tiles, and horse-head walls.

When designing the landscape, we have to consider the differences in the atmosphere between the ancient buildings and the modern commercial environment; moreover, the design should also echo the functions of the building, creating a corresponding landscape form and space. Doing so can be challenging since there is sharp contrast between the ancient building and the towering modern high-rises.

The designer carefully studied the form of ripples and displayed the curvature in the courtyard by utilizing different landscape materials. At the same time the design embodies the divergence of culture, forming a layered, spreading, and transitional landscape effect, balancing the atmospheric difference between ancient buildings and modern commercial environments.

Based on the characteristics of the architecture and the site, the space was reorganized and applied the rippling form on to the landscape, creating a gradual spatial effect.

In combination with the concept of a display platform, the landscape design with corresponding platform areas will accentuate the sense of ritual in the courtyard space. Due to the lack of windows around the ancient buildings for direct viewing from the interior, the setting of the platform provides an activity area for the outside landscape, allowing users to enjoy the courtyard space.

Entrance Space
The straight line and simple design emphasize the sense of ritual at the main entrance of the building. The ground is embedded with yellow-rust stone slab with lychee surface textures, serving as a transition from the plaza to the ancient building and echoing with the surrounding stones of the courtyard. The Fujian tea tree hedge, at each corner of the main entrance, creates a fresh and open landscape atmosphere. The north and south sides of the entrance exhibit a completely different atmosphere. The south side is a space with the hard pavement; the north side has a water feature, which breaks the linearity of the building entrance.

Outer Space
The outer space is designed with less vegetation to create an open view. The stone walls enrich the visual depth of the landscape, and the use of yellow rust stones fortify the sense of volume and sculptural feel of the stone walls.

Planting Space
Since the west door of the ancient building is more private than the other side doors, the landscape design visually extends the outdoor space, creating a sense of depth.

Courtyard Space
Since the pedestrian path is relatively narrow, the surrounding landscape of the ancient building will serve to offset the path that enters from the north . At the intersection, pedestrians will enter the design area through elevators and stairs. To avoid people looking directly at the entrance of the ancient building, which will lose a sense of mystery and curiosity, the vegetation is used to increase the depth of the space, creating a secluded and quiet atmosphere.

Hedges will cover the entrance and the paved yellow-rust stone slabs will make the landscape appear more natural. Besides, it also elongates the pedestrian path which makes the route of people entering the building more winding, adding a sense of privacy. 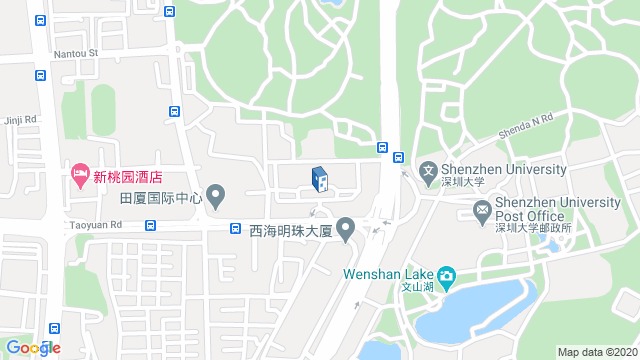 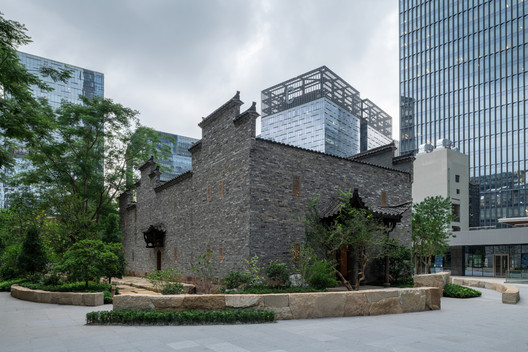