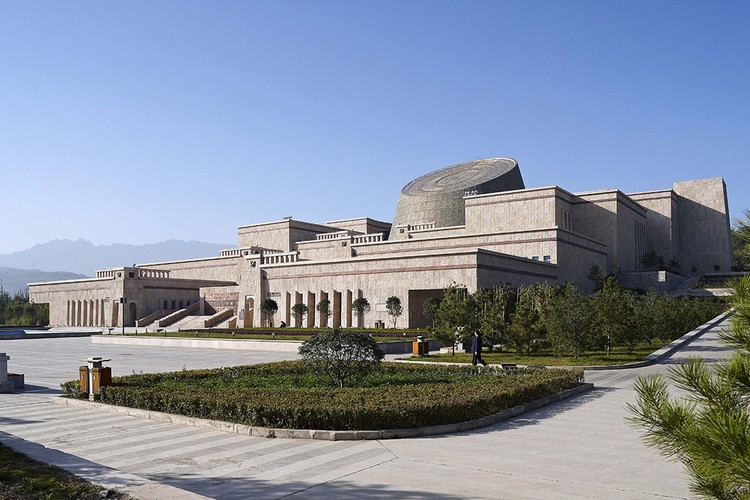 Land's historical background
Baoji is the first ancestor Yan Di's hometown, the scenic spot and historic resort is numerous, the designer decided that take the origin's region culture of Chinese nation place, the local conditions and social customs and ecological environment as the creativity's starting point, pays attention in the entire process to the transmission of historical culture, makes every effort to open new mentality that in the construction of Chinese culture.

Historical background imageswitch
Design primary intention - bronze national treasure, breaking ground rebirth
Baoji is “the township of bronzeware” in our country. When the bronzeware is unearthed, it has always filled with vitality and mystical, and caused the people to feel deep shock to the ancient times civilization. Therefore, bronzeware museum must have the historical sincere feeling, makes every effort to construct for the multiple entity of profound connotation, stirring, the modeling dignified.

The form expressed – high platform door, bronze thick soil
China classical architecture design idea was the doctrine of the mean. That upright neat, the bilateral symmetry, the axle status was especially prominent, may understand as the concept of one kind “order”. Therefore the designer adopted a series of characteristic construction mark of the local characteristics and historical inheritance to expresses “order”:

Pile of soil and high platform: The designer starts from the foot of the hill, by the multiple stairs, layer upon layer to show the traditional construction image, makes every effort to mold the sincere and vicissitudes feeling of history simultaneously has also enriched visitor's tour route.

Entrance gate: The designer uses the construction of Zhou Qin imperial palace, and equipped with the imperial palace in the bronzeware museum entrance, on the one hand ,it can stress historical sincere feeling, on the other hand it has the meaning of implication of Zhou Qin culture. Simultaneously gate enters by three zone transfers, forms the sequence space, guides the visitor to enter the museum upwardly.

Soils construction: Loess is the commonly used building material in Shanxi area, the sincere loess wall is one of locality's architectural features. The designer make the museum main body wall surface look closely to traditional wall. Close sincere, and afforest in the roof, which make the building base just like grows the common nature in the loess.

Bronze culture: Bronzewareis emphasize in the design as the museum's subject. The wall surface Outside the ellipse hall uses the bronze sheet, it looks like emerges of bronzeware. On the wall surfaces of entrance, the designer shows the collection famous bronzeware using the form of relief. ronzeware's vein pattern also appears as decoration texture on the museum main body wall surface.

History manifests of spatial arrangement
Image mold - inherit history, merges the ancient and modern
Streamline organization: Before the entranceis the submersion square of “latitude and longitude vertically and horizontally”, causes the tourist realize the bronzeware culture without even enter the museum. Passing through the basin, arrives at the stairs, people are guided to enter the main entry door. The main entry door introduces the visitor half underground exhibition space, the tourist goes down steps, which is similar to enter the bronzeware bury place, the exhibition hall is all around .After visiting the exhibition hall, the tourist may go directly to the roof square, and enjoy Wei River beautiful scene.

Landscape design: The physique design of entire museum pursues one kind of earth landscape.Mountain is not beautiful without water, the museum is equipped with the shallow pool directly, and the surroundings are excellent, the mountain and water are like a whole. 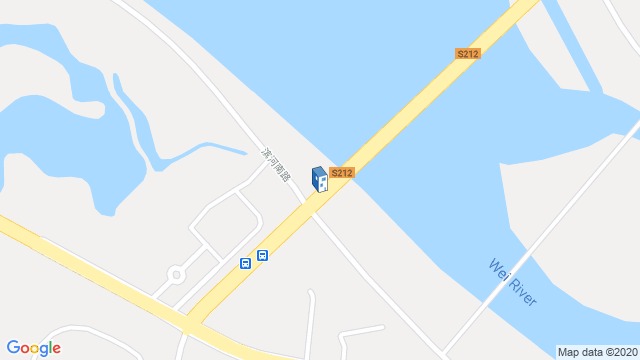 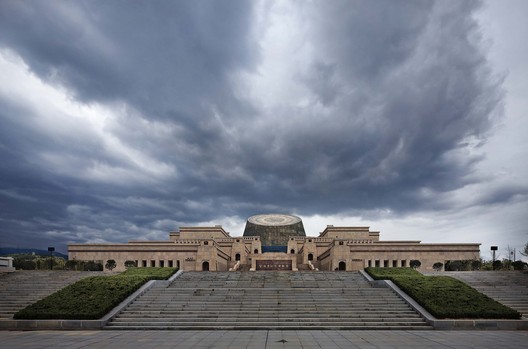 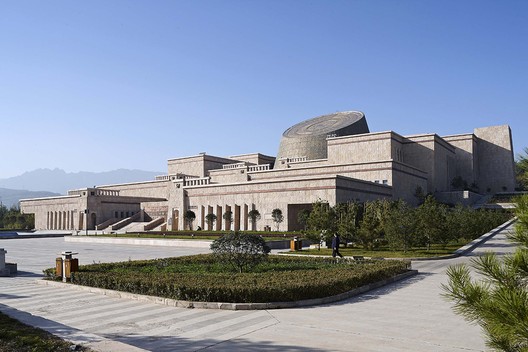