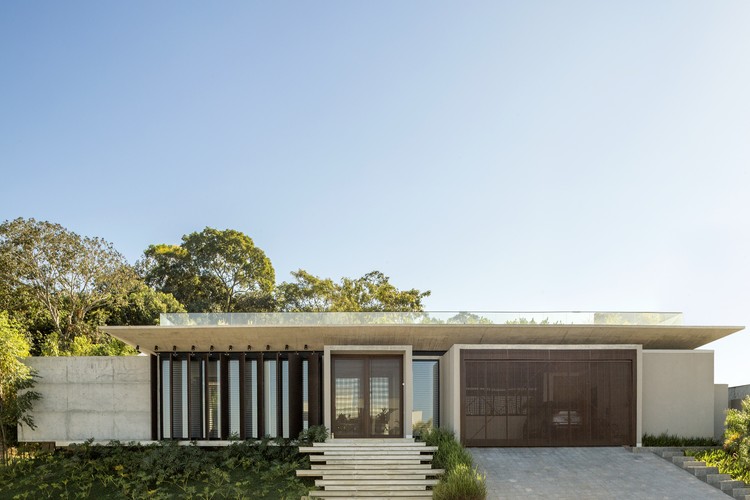 Casa da Mata (House in the Woods) is located in a residential condominium in the city of Goiânia, in the state of Goiás, located in the Center-West region of Brazil. The project was built on a triangular plot of land, with a native forest running alongside the larger edge. So, to emphasize the view and to integrate home and nature, the project was developed in the shape of an L, allowing all spaces to open to the interior courtyard, swimming pool, and forest.

The house is set on the highest point of the lot, respecting the natural landscape, and only a small amount of earthwork was done to level the environments above the pool area.

The architectural concept focuses on extending the horizontal lines, creating a visual extension of the building from all sides. The main facade combines concrete with vertical baffles for more privacy. An overhanging concrete box stretches out. This box also features an opening in the ceiling, bringing architecture and nature closer together. The L-shaped plan also offers optimal separation between the different areas, living rooms, laundry rooms, private areas, and entertainment spaces, all of which are connected to the garden with openings for ventilation and natural lighting.

To expand the landscape even further, a green roof was installed. This roof garden provides a pleasant spot for enjoying full-moon nights and late afternoons with an expanded overview of the surroundings.