Text description provided by the architects. The multiplex Etoile Cinémas was the opportunity to deal with issues of cultural and entertainment architecture. The project is part of the local development policy initiated by the city via the label SmartCity. How and with which architectural devices an architecture may show off the spectator? Inspired by Broadway by light by William Klein (1958), we centered the project on the key concept of a transfiguring performance. A cinema is a complex architecture dedicated to entertainment but also to culture and representation: we wanted our cinema to be a new place of meeting, identifiable in the urban landscape, and infused with a new grandeur to make the cinephile feels like a privileged guest.

Facing the avenue coming from the train station - a strategical place -, the building appears as a refined monolith made of steel and light. The concrete pre-slabs structure is adorned with an envelope of perforated sheet metal panels transformed into a starry mantle by a backlighting device. The starry light pattern is obtained through three different perforations randomly distributed on the panels, creating a mesh effect behind which the LEDs light up at varying frequencies. The envelope makes the multiplex a new landmark in the city and transfigures the urban space. This building is also a place where to stay thanks to its theatrical, and opulent architecture, an optimized working environment for visitors, and staff meeting ERP security standards.

Building upon the history of architectural forms, the Opéra Garnier, and the fifties modern American city, the monolith displays the social heritage dimension and universal value of Cinema. Set back from the street, it opens on a square that is a crossroads directing the flow of walkers to the cinema. The porosity of the main glazed facade draws the gaze inward and calls to pass from the inside to the outside. It also provides natural lighting and ventilation that meet the requirements of air quality and limited energy expenditure. The metallic lace located in front of the facade also serves as a sunshade, reducing the light linked to the glazed openings, and contributes to thermal regulation by concealing the concrete structure. Everything contributes to the theatrical functionality and attractiveness of the building.

The hall, the escalators, the wooden staircases with wide passageways, and the mezzanine are places of representation and promenade. The generous size of the Great hall accommodates the ticket office, confectionery and drink sales counters, and a relaxation area, and serves the vast mezzanine, a passageway to see and be seen. It helps to revalue the practice of film lovers. For the scenography, we used the graphic intensity of royal blue and spicy orange, and yellow and red. In contrast with the exterior whiteness and the mineral gray of the concrete, the dazzling color scheme generates interior panoramas, enhances the materials (carpet, metal, concrete), makes the signage. It dispenses festive energy and a sensory dimension that generate an immersive cinematographic experience and create the space-time of cinema. 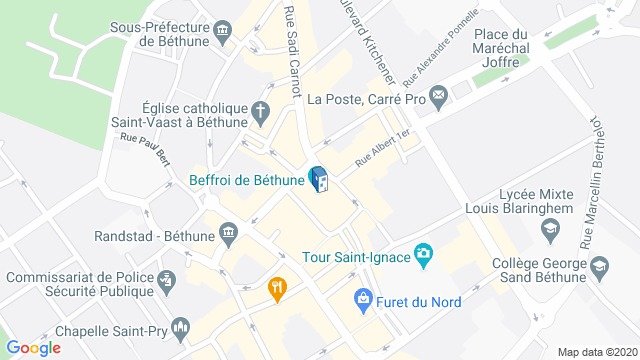 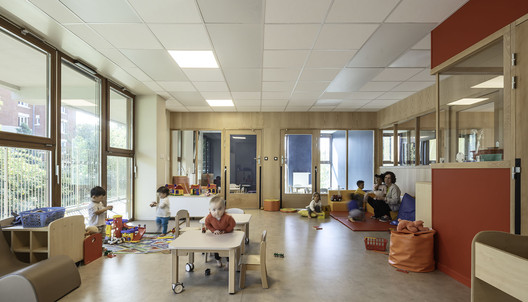