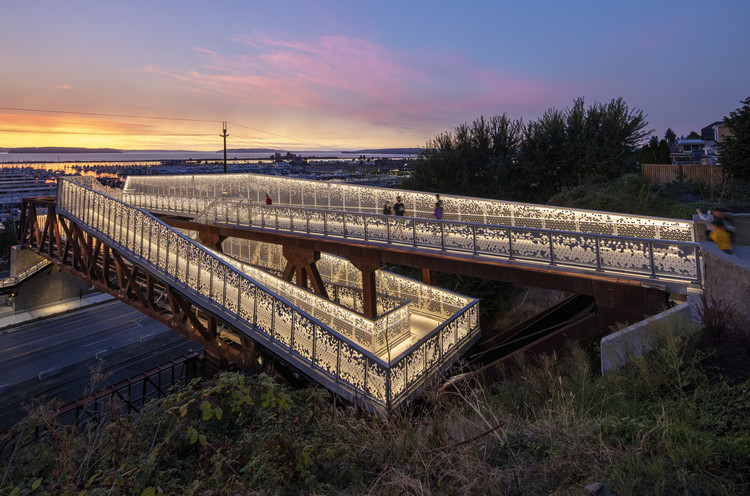 Text description provided by the architects. Elevating utilitarian infrastructure to a thoughtfully designed community asset, the Grand Avenue Park Bridge highlights the value of rethinking public realm design. The bridge transforms the Everett waterfront, establishing a new connection between the historical Grand Avenue Park and the city’s developing waterfront district. At the bridge’s recent opening, Mayor Cassie Franklin commented, “It is a beautiful bridge, it is a utility project, and it is going to be part of our city for generations to come. It is a gorgeous new asset.”

The new bridge solves a complicated sequence of grade-changes and utility needs in an unlikely new form that weaves pedestrian ramps and stairs above, around, and inside a sloping truss, presenting an inviting new crossing from Grand Avenue Park to the waterfront district. Across its 257-foot span, the bridge carries major utilities while navigating a network of existing electrical lines, a five-lane highway, and the BNSF train tracks at the base of an 80-foot-tall steep slope, all while preserving views from the park above. In part, the amazing views are preserved by having a unique entrance onto the top of the bridge such that most of the bridge structure is below Grand Avenue Park.

The design is pragmatic and economical. The truss form responds directly to its programmatic needs while recalling the form and character of traditional railroad trusses found across the Pacific Northwest. The structural elements are constructed of weathering steel, a raw form of steel, which uses rust to form a protective layer, providing corrosion resistance and enhancing the bridge’s maintainability over time. Wrapping around and running through the truss, a shining, lacey guardrail also serves as the bridge’s de-facto wayfinding system, contrasting with the raw character of the rusted truss with its silvery aluminum panels.

The guardrail features a bespoke perforation that is inspired by the forms of the surrounding natural environment. The varied density of perforations was designed to enhance the reflectivity of artificial lighting, improving the performance of the integrated linear lights at the top of the rail while minimizing glare and light pollution. Each aluminum panel is unique, responding to the geometry of the bridge, views beyond, and varying guardrail requirements.

Geometry for the 400 aluminum panels was generated through a computer script, automating the layout, numbering, and cut file production. A separate file for each panel was provided to a fabricator for use with their computer numerically controlled (CNC) Waterjet. LMN Principal Scott Crawford says that “LMN’s experimentation with our own CNC machine to fabricate full-scale mockups was essential for refining the scale of the pattern, adjusting the amount of area for the light reflection, and testing the digital cut files. This close collaboration allowed for a solution that is finely tuned to its context.”

The overlay of large-scale truss elements and small-scale perforations creates a dynamic experience of view, light, and shadow along the walking path. A tall concrete elevator and utility core serve as the western abutment, its concrete walls blasted with the same perforation pattern and wrapped in a staircase that leads to the pedestrian-level waterfront promenade.

The bridge’s iconic presence is rooted in the unexpected formal juxtaposition of muscular and delicate, rustic and refined, symmetrical and asymmetrical, inside and out. Since its completion in late August, the Grand Avenue Park Bridge has become a popular destination, enhancing the pedestrian life of the Northwest neighborhood and the growing mixed-use waterfront district. By embracing a creative pragmatic approach, the design addresses both functional and aesthetic demands, weaving urban infrastructure into the life of the city and becoming a catalyst for continued community revitalization. 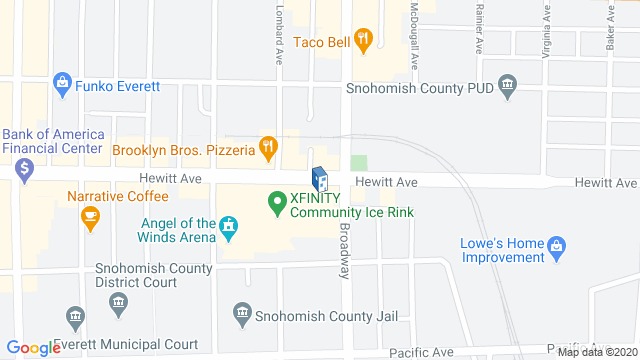 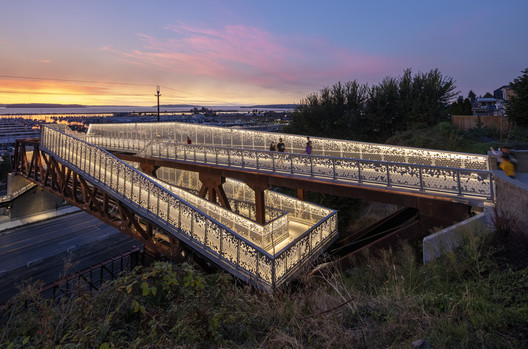