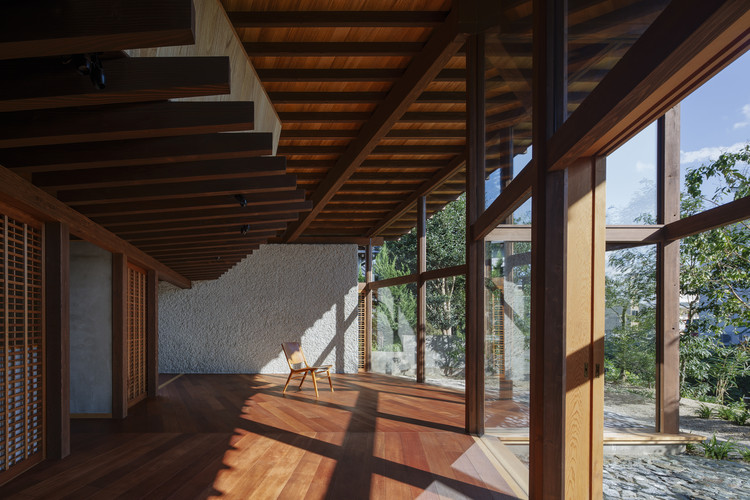 The site located in the Chikugo Plain in the southern part of Fukuoka Prefecture is long from north to south, and the road on the north side is at the end of the vehicle, so there is no traffic. A small river runs on the south side.

In order to create a backless architecture that allows comfortable light to enter all rooms, various gardens are arranged in the north, south, east and west, and it is composed of three roofs. Although the site is not large, I first envisioned using a depressed outer wall like the wall of Ise Jingu in order to provide a background surface for the approach.

The height of the drop wall is kept low, and the girder is set to 2,040 mm. In addition, the structure is such that the volume on the second floor is supported by three cantilever levers with a total length of 8 m, which brings eaves to the approach and parking space. It is also a result of emphasizing the alternating development of yang (north road), yin (under the eaves / approach), yang (east garden), yin (living room), and yang (south garden), which are the views from the north side.

In addition, this arrangement makes the inside and outside ambiguous and gives a feeling of drawing in the outside. The appearance on the north side was statically indeterminate, and the cross-sectional structure was divided into a lower layer consisting of a falling wall and an upper layer based on the plastering wall.

In addition, a glass surface with an angle was provided in the living room. The glass surface faces the river flowing on the south side to capture the scenery, and at the same time, the irregular flat surface gives the space an expanse. The sense of security that is lost by using a lot of glass is given to the feeling of being surrounded by concrete shaving walls and vague partitioning lattice doors.

The cantilever beam on the study floor that sticks out of the living room uses the idea of ​​a balance. It is a structure that has been used in temple architecture since ancient times, and by revealing the girders that serve as fulcrums and the pillars that support them, the flow of force is visualized, giving a sense of stability to the floor itself and the space. Rather than seeking a peculiar newness, I thought about the proportions and handling of materials from beginning to end, aiming for an architecture with feet on the ground. 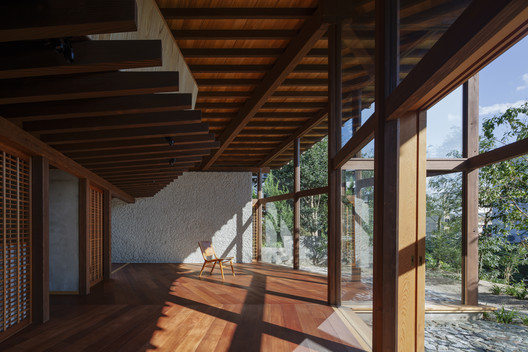