Text description provided by the architects. As it often happens this project started with some changes in the client’s family. Some new families added to the original one but his desires to live together still remained. The client already owned an ancient agricultural building and some related plot of land on the hills in the province of Modena. Having spent nearly a life living in the city centre, the owner contacted us in order to know about the possibility to rehabilitate the building and to obtain one accommodation for him and one for every child.

The housing complex was in a precarious condition and was characterized by the presence of a series of bodies chaotically added to the original volume which was itself composed by the residential block and the barn. The spurious artifacts have been demolished except for those whose rehabilitation could have constituted an added value if included in the background in a harmonious way.

We can think of the northern awning which has been replaced by a terrace for one of the accommodations. This project wanted to keep the original features of the building so the distribution of the new accommodations has respected the original scan of the masonry and of the structure. The height of the slabs has been kept and they have been reinforced. This has allowed us to keep the original vaulted stair. There is also a lift there has been built in a hidden position in order not to change the shape or the volume of the building.

The residential block has been redrawn to obtain three accommodations for the client’s children while the barn has been reconverted to the accommodation for the owner. While restoring this part of the building we have tried to keep the original structure (vaulted slabs, wooden covering, differences in height and double volumes) but there are also new elements like steel stairs and beams. The main entrance is an old “porta morta” which at the beginning of our work was completely walled up, now, as you can see, it is generously enlightened.

On the first floor, we have demolished the different structural elements and we have suggested some characteristics of all the barns in that area. The client then indulged in decorating his flat with furniture and art pieces of different origins. The floor of the poolside is made of stone that comes from the Apennines. 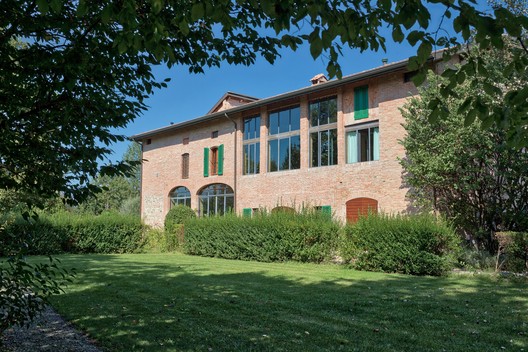