Save
Images Reveal Tallest Tower in Auckland, New Zealand Set for Completion in 2021
Share
Or
Copy

Set to be one of the tallest towers in Auckland at 178.65 meters, The Pacifica will complement the existing skyline of Auckland’s central business district. Designed by Plus Architecture, the tower “allows for a deep connection and interaction at every level”, and highlights a significant shift in Auckland’s housing approach.

While the city has only recently begun embracing the concept of inner-city apartment living, the Pacifica comes as a pioneering project, changing Auckland’s housing demographics and setting a new benchmark for apartment living.

Considering first the impact on the city skyline and the relationship the tower would eventually have with Waitemata Harbour, Plus Architecture imagined an intervention that will integrate existing urban elements in close proximity to the site. In fact, the design incorporates and celebrates “the adjoining laneways, the former Taspac House, a 1920’s office building by a previous owner and over which The Pacifica will cantilever once complete; and finally, the neighboring ‘Achilles House’, a heritage-listed building typical of the many warehouse-style offices erected in the 20th century”.

The four main interface points of the site rise from the ground floor and twist to take the form of a traditional Maori Pikorua, symbolizing togetherness. Reaching upper levels, the mass takes on a shifting glass façade that mirrors the waters of the Waitemata Harbour. Featuring 273 apartments, the highrise includes enclosed winter gardens above the 26th floor. On the lower levels, The Pacifica offers a variety of commercial amenities, and a new laneway helps to activate the site, encouraging pedestrian traffic.

The Pacifica- Plus Architecture 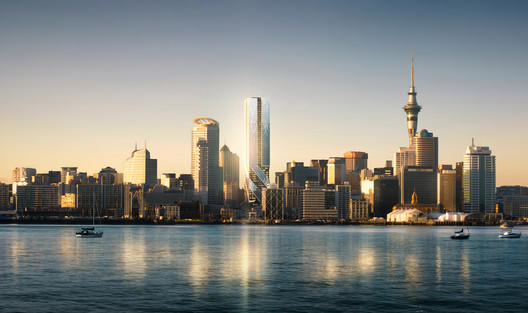