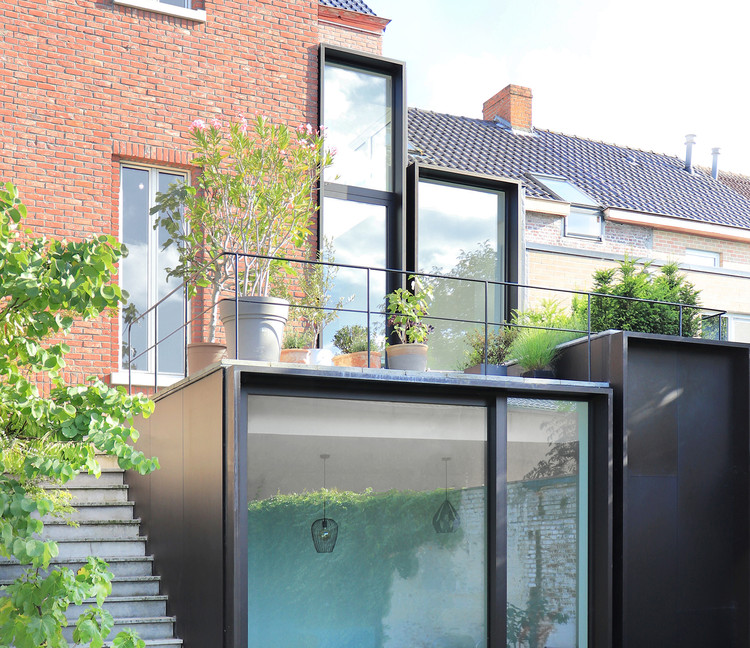 Text description provided by the architects. The 19th century mansion is located at a busy junction on the ringway of Ghent. On the street side, the house has a wide façade of three storeys high topped with a saddle roof. On the first floor, a curved bay window offers an unobstructed view over the water. On the garden side, the main volume connects with a stately high extension. This houses the original wooden staircase that gracefully leads to the first floor. In the course of time, various extensions of visibly inferior quality were built around this stairwell.

The client wished to recapture the original character of the house and to restore its valuable existing elements. The stairs, fireplaces, doors and parquet have been preserved and recuperated. The later additions were technically problematic and had to be removed. The main volume, along with the original stairwell, became the basis for a new extension. In this way, the house could again provide sufficient space for a residential program and a practice with a recording and photo studio.

The architects chose to withdraw the living areas from the ground floor. The practice rooms were accommodated here. This created a healthy separation between work and private life. The high rooms on the first floor also receive more natural daylight. On the street side, the kitchen offers a view on the water over the full width of the façade, without any privacy issues, and is elevated above the traffic. However, this was only possible on the condition that the living spaces on the rear side could open directly onto their own outdoor space.

The connection to the city garden at ground level was made via a terrace. By maintaining a high wall during the demolition works, privacy could be preserved on the side of the exterior stairs. For this same purpose, a green zone was constructed on the other side. The vegetation also creates a pleasant visual transition from the interior to the garden. The terrace forms the roof of the "garden room" on the ground floor. This provides a view from the entrance and staircase towards the garden and can be closed off as a meeting room. By means of the high sliding window, it can also be transformed into a canopy for the garden.

The existing volume on the first floor was also expanded. The new part makes the transition between the high volume of the staircase and the lower extension of the adjacent house. By realising this in stages, a skylight is created across the depth of the extension. The window captures the last evening sun and reflects the light further into the living space.

The new elements (the skylight, the green zone, the terrace, and the outside staircase) result in a new extension at the rear façade that gradually makes the transition from the tower volume of the staircase to the garden. This cascade of volumes was conceived as a composition of frameworks and executed in anodised dark brown aluminum. Its abstraction provides a clear contrast with the existing materials.

The front façade and interior of the authentic parts have largely been preserved. Further adjustments to the layouts were realized by interior woodworks. Only the roof was given a cut-out to allow sufficient daylight to enter through a roof terrace and to open the space to the panoramic view. 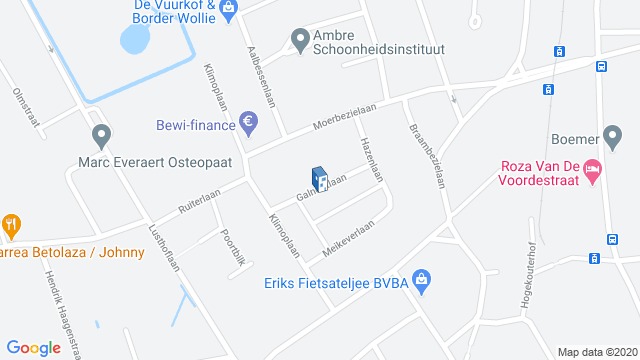 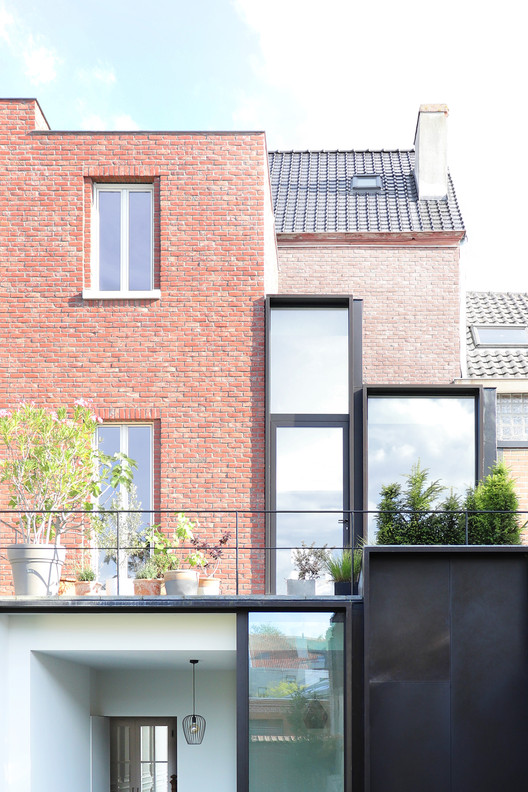 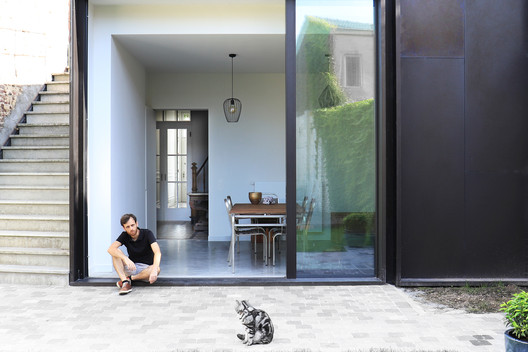