Text description provided by the architects. The client named the building ‘Being’ at the beginning of the project. Movement means being. Leaves and clouds moving as air flows, light and shadow moving as sun flows. The project started with the idea of creating a space and landscape using such natural elements on the site.

Landscape - There are old houses and restaurants around the planned site and a high-rise office building opposite it. In other words, there is no special landscape, so we decided to create a landscape on the site. The function of the walls is to sculpt and clarify the view to create the landscape. At the same time, the facade of the building has layers to give a sense of volume. It blocks the view of cluttered surrounding buildings and creates scenery with the sky, bamboo, shrubs, and ground cover plants. The plan was designed to allow visitors to look at the ‘things being’ while avoiding spatiality inside the staircase of common neighborhood living facilities in the city center.

Circulation - The third and fourth floors are a psychological counseling center run by the client couple. The things being in nature are placed on the circulation of visitors. The flower beds arranged along the axis of the outside staircase are planted with a mixture of high and low bamboo. Low bamboo, shrubs, and ground cover plants were made visible to people climbing upstairs. Unlike the inner staircases of common neighborhood living facilities, the people who climb the outer staircase experience the bamboo swaying under the wind and the shadows of the bamboo and see the flowing clouds When the leaves fall, one can step on the fallen leaves and listen to the birds on the flower beds. Entering the third floor, the fourth floor leads to indoor stairs. The stairway receives natural light through the skylight. As the light changes over time, the atmosphere of the space changes.

The tiny wings of a butterfly in the city center - Like the name of the building, ‘Being’ creating a space where one can feel the ‘being’ through moving nature, such as light, shadows, wind sounds, trees, flowers and clouds, in a small land in the city is like a tightrope at the border between material and spirit. In general, the landscaping of neighborhood living facilities in the city is arranged in the empty corner space without any significant connection with the building space. In the project, the use of strict neighborhood living facilities and the small land had to maximize the areas within the legal allowance. At the same time, the goal was to plan nature to be actively linked to the interior space while capturing nature in the remaining exterior space. As a result, Being, a neighborhood living facility in Deokcheon-dong, has its own identity. 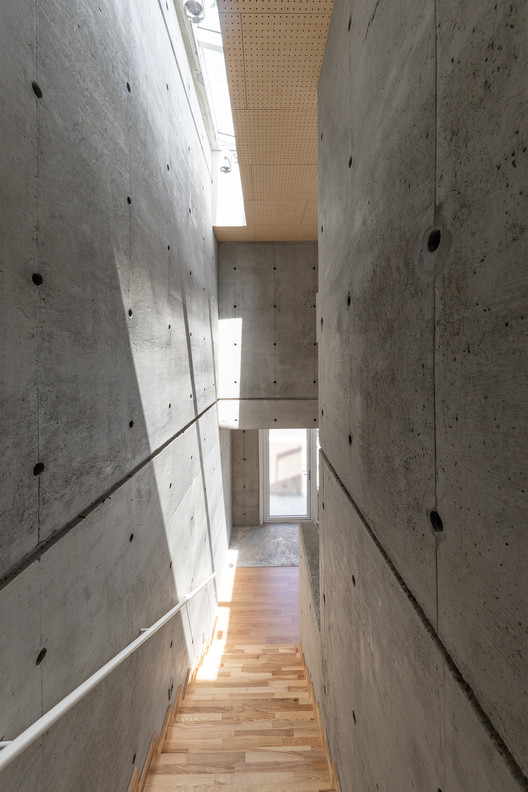