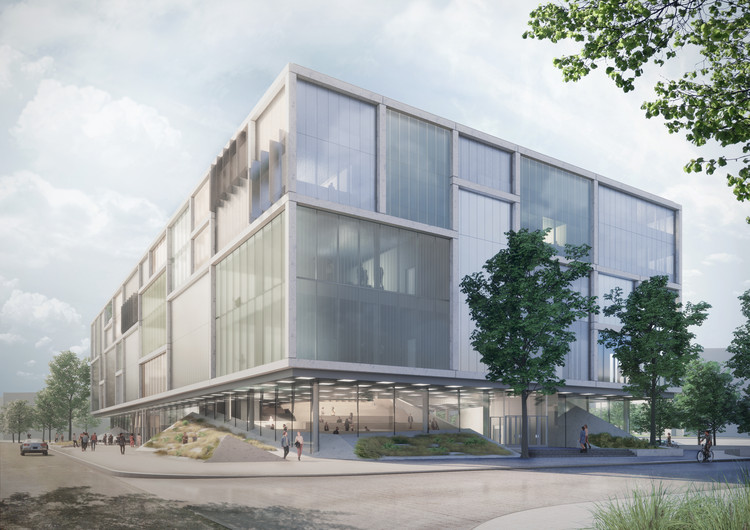 The project includes 21 classrooms of various sizes and configurations ranging from a 500-seat auditorium to smaller 24-seat active learning environments. "We envisioned a truly flexible environment that broke down traditional pedagogies and instead, encouraged a fluid learning experience unconfined by the walls of the classroom," says Paul Stevens, Founder, and Senior Principal at ZAS Architects. "Peer-to-peer learning is emulated in all aspects of the design." Learning spaces sit on top of one another, creating opportunities for platform and bleacher seating.

On the exterior, the framed grid that forms the building’s façade creates a design that combines "various volumes, scales, surfaces and spatial qualities. Inspired by the form of Printer’s Tray predominantly used during the 19th Century, the building’s four distinct façades mirror the tray’s compartments and represent the diversity of spaces and educational environments within." The largely transparent facade is made with mullion-free structural glass panes.

Inspired by the Highland Creek ravine that weaves through the campus, the design aims to extend green space indoors. Meanwhile two rooftop gardens also merge indoor and outdoor spaces to enhance the public realm within the building’s upper levels. "Ultimately, this project is about more than classrooms. It’s about student support, both physically and mentally," says Peter Duckworth-Pilkington, Principal at ZAS Architects. ”Dedicating a state-of-the-art, central floor to student health sends a powerful message that well-being needs are not just accommodated at the University of Toronto, they are being prioritized." 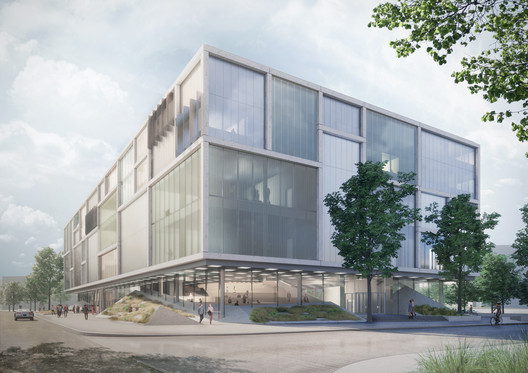