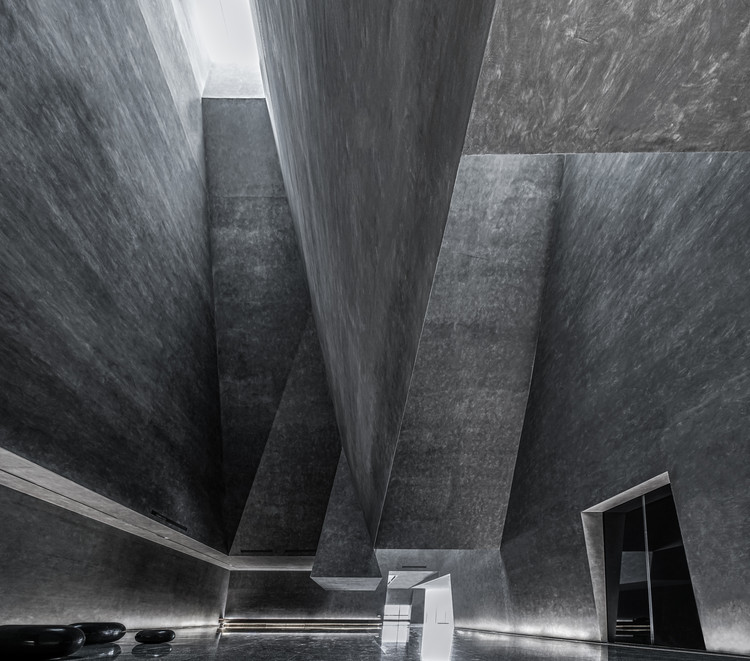 Text description provided by the architects. Yingliang Stone Natural History Museum | Rebirth of the Crystalline Space Over the years of stone mining, the manufacture has discovered numerous fossils. The manufacture decides to dedicate the headquarter building to a museum to tell the history of the fossils and the natural science of researching the fossil. There are two major challenges during the renovation process. The first one is the conflict between private headquarter and public museums. The second one is the direct sunlight gained at the atrium space. The addition of museum space will limit the deficient light to the office space even more. The archaic rock was first discovered at the crystalized base inside the landmass. Those crystalloids become how they look like today through a long term of high temperature, high pressure, mixture, and accumulation. The original form of the stone, its crystal structure, brings us a new architectural language.

We introduce three intersected crystalloids into the atrium space. The quadrangular pyramid light well stretches from the building roof to the first-floor ceiling to bring light into the first-floor museum atrium while the second-floor exhibition space and the rest of the office space are lite by the remaining portion of the building skylight, as well as the reflected light bounced by the tilted outer-surface of the light well. Surrounding the vertical crystalloids, there are horizontal ones that keep growing, inserting, and finally form into various fossil showrooms. The layout of the showrooms determined by the time and storyline. The horizontal crystalloids also introduce the sunlight to the interior space along with their growing direction. In all, the tilted crystalloids interweave the sunlight and exhibition spaces.

The finalized renovation appeared a form of a penetrated Cartesian grid. The orthogonal system of columns and beams transformed into each illuminated but mysterious triangulate space. As the heavy mass floating up, the anti-gravity space places the audience in an unknown space seemly coming straight from a sci-fi film. The inside and outside of the atrium spaces were divided into the museum and office space, while the interior space of the museum appears into a complicated inside of the crystal with endless growth. The archaic stones crystallized into different architectural spaces while communicating with the spaces as the exhibits across time and spaces. There is no other decoration within the exhibition space. The only element used to express the imprint of the eons of the deposit is a series of tiled walls.

This simplicity brings visitors a prepositional spatial, dimensional, and sunlight experience. The walls are not only the boundaries of different function, but also reformed into a calm and cold, cave-like environment, which make the geological fossil looks even more aged. The inner wall of the crystalloid is the ceiling of the museum at the same time. The outside of the wall functions as the reflected board of the office building, while it separates private and public spaces.

It is difficult to express controlled points in space through a two-dimensional Cartesian grid. We come up with a three-dimensional coordinate system for spatial demarcation, and the design was completely understood on the construction site. With the help of the total station apparatus, the spatial control points in the model were mapped out precisely in space, then construction becomes possible. The material used within the project is quite and sententious in order to highlight how sunlight touches the spaces and provide an appropriate exhibition environment to the archaic fossils. 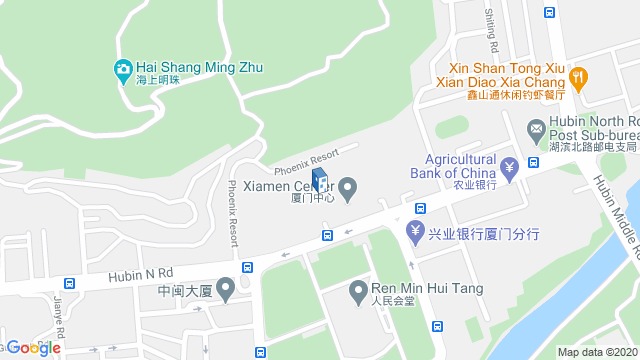 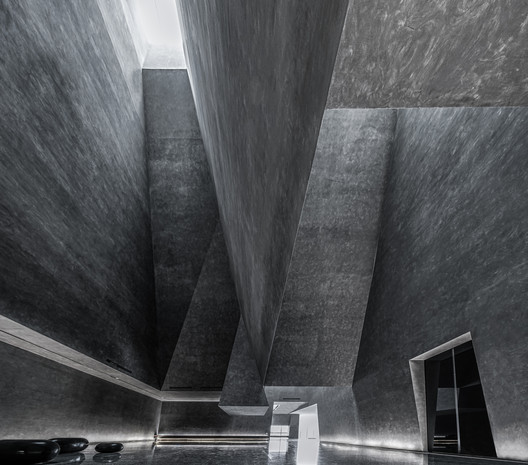