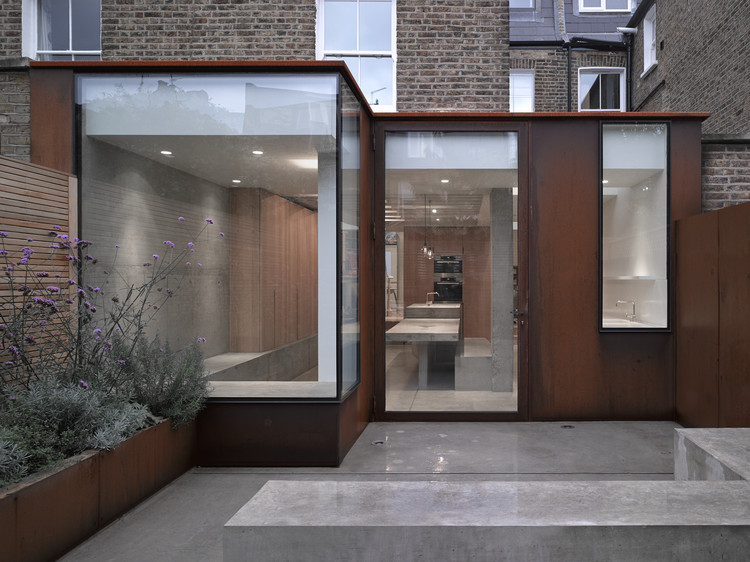 Text description provided by the architects. This was a project about making something extraordinary out of the very ordinary. We were approached by Kate and Ewan Thompson to extend and re-furbish their Victorian terraced house in Shepherd’s Bush for a growing family. Our remit was very conventional: a ground floor extension and loft conversion – a potentially hum-drum brief. What wasn’t so conventional was their approach: our task was to come up with a design which rejected the typical solutions with aspirations beyond the planning-friendly aesthetics of a London terraced house extension.

From the outset, discussions centred around the use of insitu concrete: for floors, walls and ‘furniture’ elements within the scheme. As the dominant material presence, concrete was chosen primarily for its aesthetic qualities but the opportunity to build in high thermal mass and develop free-form structures became increasingly important considerations as the project progressed. As a point of reference concrete then became the driver for all other material decisions. The facade of the extension is clad in rusted Corten steel and the interior joinery fronts made from Grey Elm- both providing the necessary contrast, warmth and richness against the cool swathes of smooth concrete.

Presenting fewer opportunities for spatial invention, the loft conversion has a very different, more ethereal feel to the ground floor. A reductive palette of Scandinavian white-washed Douglas Fir boards, light walls and exposed brickwork keep it simple and bright. The Victorian stairwell winds up the house and collides with the new loft staircase – a meeting between the old and the new – which leads up to the top landing and is illuminated with natural daylight from the rooflight above. The treads of the staircase lead on to a large expanse of Douglas Fir boards which flood the room and run up the walls as panelling.