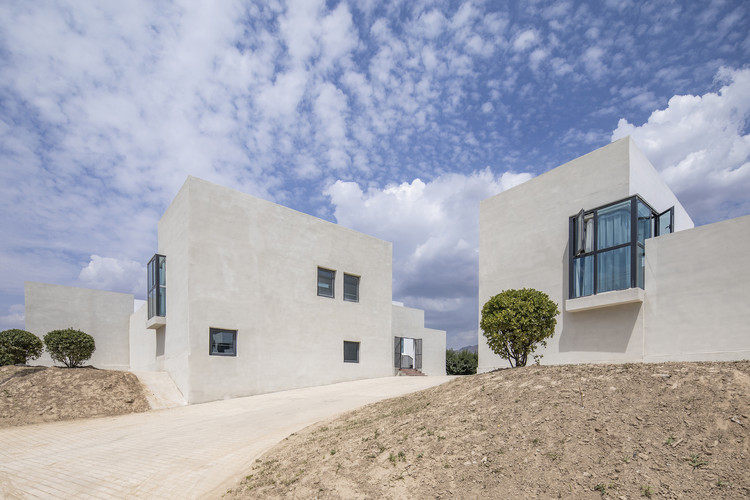 Purpose: a new neighborhood of common life
The project is located in Maxiang Village, Tangwang Town, Dongxiang Autonomous County, Gansu Province of China. It is known as the ancient silk road Hehuangkou, the first village of Apricot blossom on Longshang with a special species named Dajie apricot. Every spring when the apricots blooming, Apricot Flower Festival is taking place in this small village attracting the tourists from all over the country. Maxiang Village is a multi-ethnic and multi-religious village located at the intersection region of Han and Tibet. The village has not only Muslim mosque of Dongxiang ethnic group, but also auspicious temple of Tibetan Buddhism, and temples of Taoism.

Therefore, the narrow open spaces in the village are occupied by various activities and festivals in terms of tourism, religion, and folklore. The social space in Maxiang Village has thus the complexity and diversity as in cities. How to make people live together better has become the starting point of our project. We are looking for an architectural form that protects the diversity of their private realm and also is able to achieve active communication and living together in a public sphere. This form is called the new neighborhood of common life.

Site and place: New Home-stay of Maxiang Village in the high altitude area of the northwest China
The lowest elevation of Maxiang Village exceeds 1,700 meters. The site of the project consists of two plots that are with a similar size and close together in the north and south. Therefore, this project is divided into two parts, north and south, to facilitate the clarity of land ownership. Not far from the east side of the site is a cliff with a depth of more than ten meters where beside flowing Tao River, a tributary of the Yellow River. On the west side of the site is a country road connecting the villages. Although this plot is not close to the village residences but very near them. Apart from property rights and other reasons, the main reason for the site selection is that it is located between the two main residential settlements of the village and it is very close to the newly built Dongxiang Cultural Center. It is expected that it will contribute to forming of a new countryside lifestyle with the culture centre together. This is also the implementation of the designer's previous strategy of revitalizing the Maxiang countryside.

That is, through open social life and appropriate commercial operations, carefully implanting small-scale urban public products and cultural tourism composite units into rural organic public bodies, to drive the bottom-up local service industry through top-down public investment. As a new home-stay project, it is not located in either the two settlements of the village but in between which can greatly reduce the impact on the life of the existing village but show a direction of the future village urbanization development of Maxiang.

This is of course also a consideration about the future trend of miniaturization of rural families. With the development of large rural families into small families, the kinship style and large family courtyards will gradually be replaced by small family housing units, and the neighborhood style courtyards of Maxiang new home-stay plan provide a source of a new form coming from the traditional architectural form: “group yard”. This will be a new low-rise, high-density collective residential form that is adapted to the intensive development of rural land in China. It aims to search a way of returning to nature and simplicity but achieving a high-quality and modern lifestyle for the local people.

Spatial language: Hole and sunlight
The project is located on the dry and rain-less plateau in the northwest China. The air transparency is extremely high which not only brings high ultraviolet radiation but also brings colorful and varied daylight and sky. The space not only forms courtyards but also materializes into  building volume. The interior and exterior of the building space are connected as a whole through daylight. Daylight cuts and shapes the space like a carving knife in the hand of sculptor. The opening hole has become an important spatial language, which makes daylight become the core of the design. The shape of the holes not only forms the courtyard vertically but also connects the indoor and outdoor, the courtyard and the outside horizontally.

The white wall presents the rich colors and variations projected by sunlight to the maximum. The corners of the eight residential buildings facing outwards are all designed with an hole, and a glass cube protruding from the outer wall is designed in it so that the internal space of the second-story bedroom is connected with the courtyard. In order to coordinate with the existing village's residential buildings in height, the height of Maxiang New Home-stay is set to be not higher than 5.5 meters. Therefore, each residential unit is designed as two floors and the ground floor is 1.5 meters underground. This design not only increases the use area of the building, but also protects the privacy of the courtyard in sight. At the same time, the semi-underground design also enables the building to take advantage of the isolation of the earth itself to save energy during the long winter. 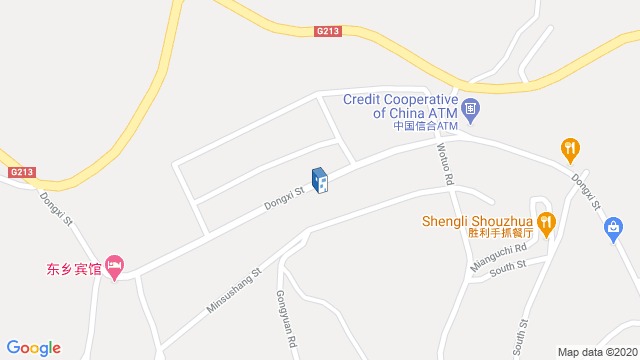 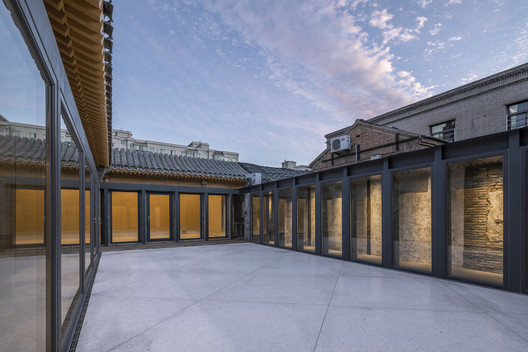 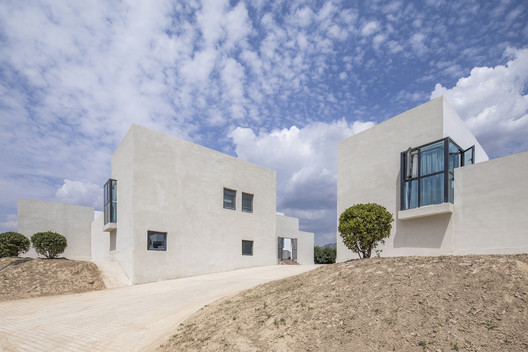