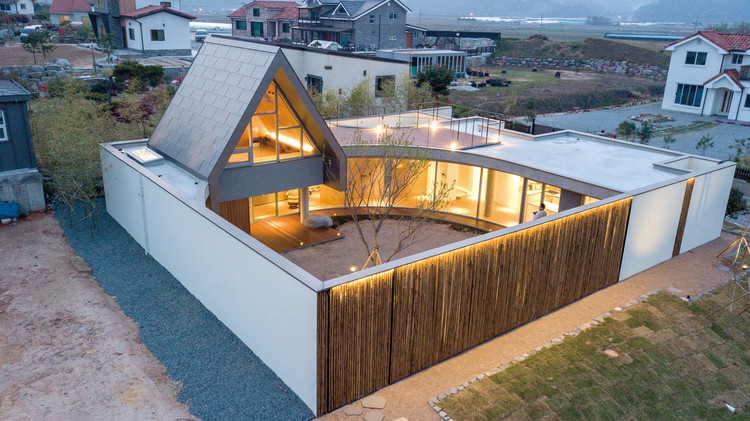 Text description provided by the architects. When a day has spring feeling and wet after raining in Muchang-ri, we met a late 40's dink couple on a wide and warm site which has cozy atmosphere with moderate mountain. They were dreaming a rural life depart from city life that quiet and can enjoy composure while even small space. They had honest wishes such as tending vegetable garden on aside of courtyard and drinking husband made elaborate drip coffee under the eaves.

"We want to stare each other in everywhere at home" "Pardon me?"  The couple had a special requirement from initial stage of planning, that was 'Desire staring each other in everywhere at home'. I thought that was unusual because I understood their prerequisite as a means for surveillance each other. However, as time goes by listening their story, they got used to spending time together every time as dink couple.

Then, I got to know that they wanted spatial structure reflecting their life pattern. I was hooked again that I need to plan house delicately and meticulously than other kind of building because house reflects life of people who live in as it is. It was intended that house has smooth-flowing circulation without sharp corner on any space and is filled with warmth of sunlight which fills up courtyard. I started to fill an image with space is pierced couple's murmuring sound faintly in everywhere of house.

Organic spatial structure of courtyard and interior space. There is no space as room in this house. All of space on the 1st floor have organic form and structure, also they are opened toward the courtyard. The yard is a background which includes expanding all function of this house and a space which plays a centripetal part. Entire space connecting kitchen - entrance - living room is opening toward courtyard, thus all space are bright and warm also are interconnected compactly with courtyard visually and spatially.

The eaves that is tensile over 1.2m~2m prevents summer sunlight entering deep inside and become a space provide relaxation by watching raindrops dropping from edge of the eaves. Especially, the apricot tree in the center of courtyard was selected by the client and architect by considering it's location and kind of tree to permeates transforming of a season into whole space in the house.

Meet up a new space through a hidden door in the bedroom. The second floor is the most private bedroom for the couple. They can take a view the most beautiful scenery in the house at this space also has different dimensional spatial impression than the 1st floor and provides visual expansion. When sit on the bed has level difference they can watch a distant view without interference of view in their own space.

The structure of the second floor is a low gable roof form and they can feel like having a rest in a camping site which is cozy and scenic. They can enter the rooftop covered deck through a hidden door behind the bedroom. The rooftop is the most open place in this house and it is possible to look surrounding beautiful scenery of the house. We planned that place considering diverse utilizations such as trimming and drying food ingredients.

Internalized courtyard maintaining privacy even in the evening. Surroundings of this house have different shape and spatial structure with ordinary rural house. Rather than place courtyard on the south and building on the north as normal, this house is surrounded with embracing wall and 60mm diameter roasted bamboo transported from 'Damyang' around the boundary of entire site. Instead of keeping to the south facing, make whole interior space to embrace courtyard for getting homogeneous sunlight into the interior space.

Furthermore, opened the second floor view widely toward the gorgeous landscape. They can enjoy the exterior space with their family or guests through the internalized garden safely without intervention of others, even doesn't need to close blinds or curtains. On the other hand, it can be a passage communicating with village at times by opening the bamboo wall. The bamboo elevation by using accessible natural material from nearby area melts into surroundings smoothly and genially.

One afternoon, when we were taking photos after getting approval of use, stared at the distant view as sitting on the bed quietly. After that the silence, client's one word made me feel the best reward as an architect and solve the indigestion in the meantime. "I love this space so much." 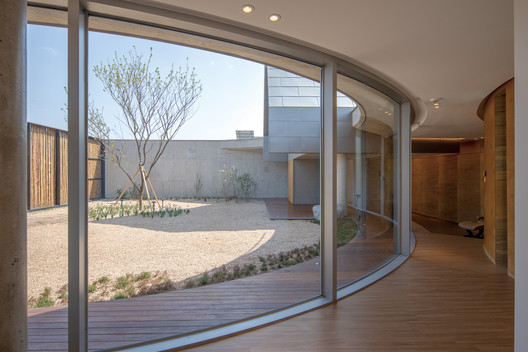 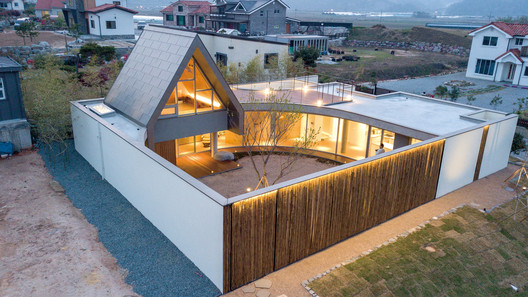