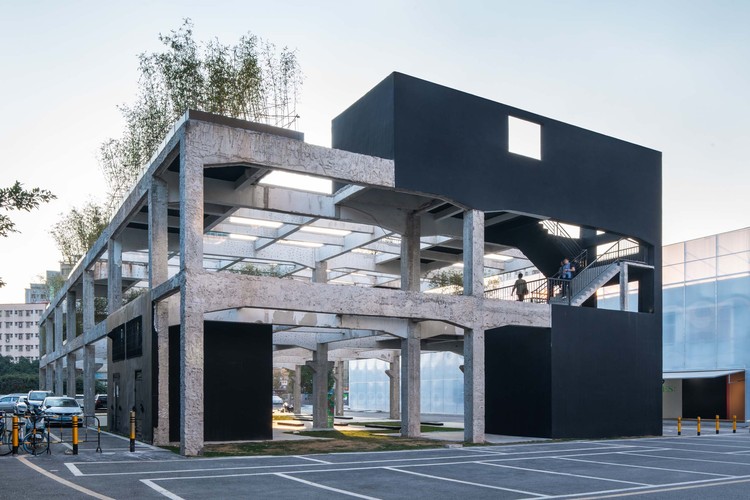 The exterior of Qiaotou Ruin Garden - An vacant industrial building was transformed into a "ruin-structure space" between ruins, architecture, landscape, art installations, and infrastructure. The slab, roof, wall, and floor were partially removed, and the ruins of the structural frame body remained. Flower ponds and bamboo were placed on the frame to form a sky garden.

This two-story industrial building at Qiaotou Village, Bao’an District, was built in the early 1980s as a village-run packing plant. It was abandoned about five years ago and has remained vacant as a ruin. Located at a subway line 11 station, this building has the potential to be demolished and transformed into a commercial office complex due to urban renewal. Architects came up with the concept of ‘reductive construction’ to explore a new approach of urban renewal which goes beyond simple demolition and renewal.

The project is part of the exhibition space of the 2019 Bi-City Biennale of Urbanism/Architecture(UABB) Bao'an Qiaotou Sub-venue and also serves as an exhibition work. During the Biennale, it serves as the venue for the opening ceremony and several public events. After the exhibition, this building will be permanently preserved.

Reduced Construction. Qiaotou Ruin Garden was designed by ARCity Office. This project began in September 2019 and was completed in October 2019. The main process of construction is the cutting of the concrete floor slabs, walls, and floors with a cutter. The remaining structural framing became the main body of Qiaotou Ruin Garden, and the remaining floor slab debris from the cutting was partially utilized as a resting bench unit. The project follows the 5R principles of sustainable design (Revalue, Re-new, Reduce, Reuse, Recycle) to create a new spatial state.

Reverse Design. A 'reverse design' method was adopted by partially removing floors, roofs, walls, and grounds from the existing building volume and space. This process is like a way of stone carving. This method aims at looking for "invisible building entities" to create new spaces that can be viewed and used. In other words, the reverse design creates and adds new value to the original building.

Augmented Ruins. Qiaotou ruins garden which was a vacant factory building has been redesigned and transformed from "incomplete ruins space" into a real ruin frame that represents a unique aesthetics of ruins. Furthermore, as part of the effort to enhance the sense of destruction, workers were encouraged to improvise to a certain extent during the construction process, such as gouging the structure, to create ruin details.

Ruin-Structure Space. In general, ruins passively emerge from natural impacts (earthquake, weathering, etc.) and artificial reasons (war, demolition, etc.). These ruins can be regarded as a kind of 'ruin landscape' and can serve new functions. The ruin-structure space is the result of the active stripping of the structural frame (including some solid components) of the building, which can be reused and be filled with new entities and functions. This project provides an expandable framework that is like an infrastructure that has a similar functional support role as transportation, municipal and other infrastructure. By inserting new structural, functional units, it can be quickly transformed into an urban space with a specific function.

Abstract Grid. The frame structure is actually an "intrinsic abstract grid" which only has an abstract constructive function, but not any specific architectural function. When this abstract grid is fully revealed through the methods of reduced construction and reverse design, it creates a unique beauty of construction. As an abstract space that represents the aesthetics of construction, Qiaotou Ruin Garden can not only be viewed and appreciated but also be entered, roamed, and experienced. Under the rays of the sun, the abstract grid, along with the blue sky and white clouds, creates a singular landscape.

Sky Garden. In order to give the ruined frame a sense of rebirth, architects decided to add some plants to the frame to transform the ruin into a sky garden. Bamboo and lawn were planted on the remaining slabs, roofs, and the ground. Besides these deliberately designed natural objects, wind-blown dandelions and wild grass seeds brought in by birds are slowly entering the garden along with the wheel of time.

Community Scene. Qiaotou Ruin Garden creates a unique public space at a very low cost which is only about RMB 700,000. The public space is free and open 24 hours a day, and can host exhibition openings, academic forums, singers' concerts, and children's educational and experiential activities. Qiaotou Ruin Garden has become an interesting and vibrant center for the community. 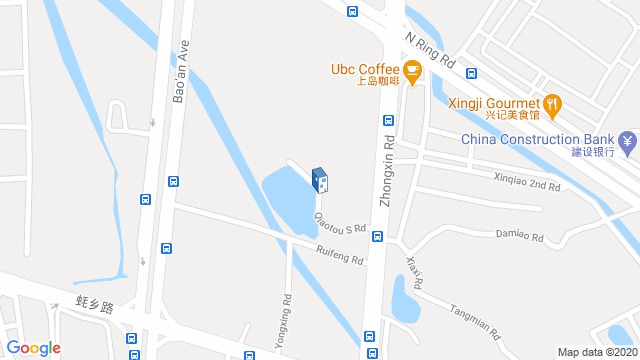 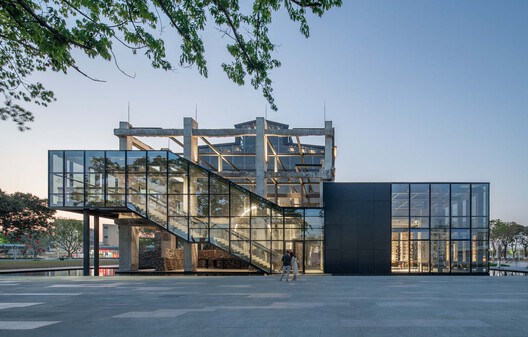 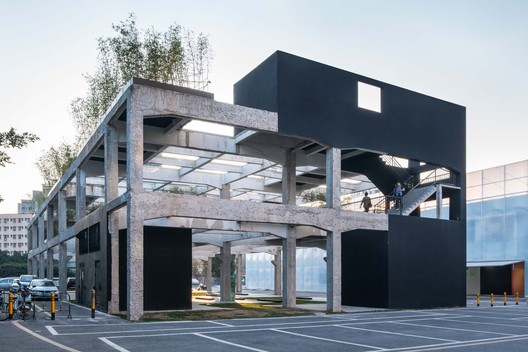