Save
Waffles, Cones and Cups: The Architecture of Ice Cream
Share
Or
Copy

Sherbet, gelato, mochi and more. The architecture of ice cream is as diverse as its structure and flavors, ranging from pop-ups and small stands to elaborate creameries. Whether designing for a larger franchise with set standards, or a bespoke mom and pop shop, architects and designers are reimagining the spatial experience of ice cream. In turn, they are catering to evolving tastes while embodying the identity of diverse brands. 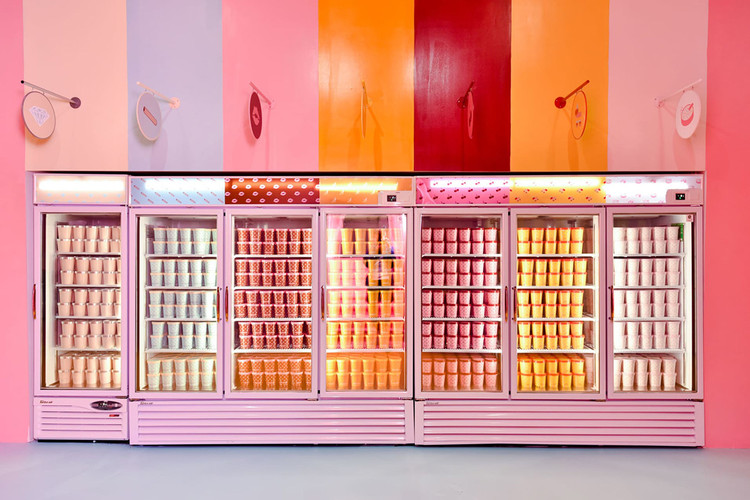 Today, the architecture of ice cream often reflects specific narratives and imagery appealing to public audiences. From the well-known (and architecturally-inspired) brand Coolhaus, to the Instagram-ready Museum of Ice Cream in San Francisco and New York, contemporary designs make the most of color, environmental graphics and lighting. The following projects showcase scoop shops and ice-cream inspired architecture around the world, each combining spatial experience with hospitality design and a touch of gastronomy.

This is the flagship store in Cordoba of Lucciano's, the ice cream company established in 2011 by Christian and Daniel Otero, who wanted to satisfy the most demanding customers of artisanal ice cream. The place is located in “Cerro de las Rosas” one of the most visited restaurant epicenters of Córdoba. Lucciano's noticed that costumers were looking for more than just the best ice cream, they were looking for a unique experience.

Izzy’s is the quintessential neighborhood mom and pop ice cream store. Jeff Sommers and Lara Hammel quit jobs in teaching and law to open an ice cream store in a small rented store front in St Paul. Due to growing demand they decided to create a Minneapolis branch which would have a small retail shop and a larger kitchen where they could continue small-batch ice cream production.

The relaunch of a 47 year-old brand in Mexico centered on creating joy through natural products and yogurt ice-cream. The design challenge began by rethinking the brand spirit from the inside-out, making people feel part of the new journey that was about to begin. The bee had been the brand's iconic symbol since the beginning, and the work was inspired by the Mexican bee Xunan-Cab.

Located inside a mall, this project used hydraulic floor tiles and the colors of the brand's mark. A community table allows sharing between people and the maximum use of the space. To convey the philosophy of the brand and the use of natural products in the manufacturing of gelato, the same concept was used in the architecture, utilizing natural materials such as pine wood furniture, bricks and greenery.

Drawing inspiration from the 80’s Memphis design movement, Ice Scream is a waffle cone of modernism, pop art, and a sprinkle of the 1950’s Kitsch design style. The 24-seat nitrogen ice cream parlor is a declaration that the Bronx, namely the Mall at Bay Plaza, can contribute to the world of design. Geometric neon shapes appear to float in the storefront drawing attention to the nitrogen attraction further inside.

Lodovnia, a new mobile ice cream shop with a unique facade, and it is located in the heart of Poznań’s Stary Browar. Since the building took a central spot in the Courtyard of Art, mode:linaTM studio approached its façade as if it was a piece of art. Dark walls were extended with the use of almost one thousand white cones, referring to Lodovnia's flagship product – natural ice cream in a cone.

The Museum of Ice Cream was made to transform concepts and dreams into spaces that provoke imagination and creativity. MOIC is designed to be a culturally inclusive environment and community, inspiring human connection and through the universal power of ice cream. Museum of Ice Cream was made around multi-sensorial expressions of ice cream that cater to the appetites of the public.