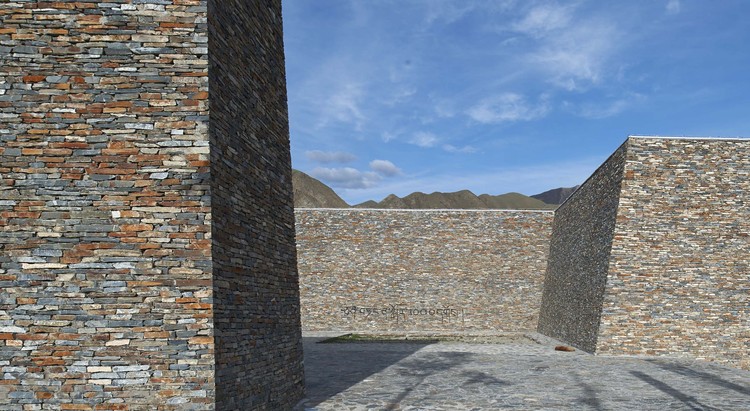 Text description provided by the architects. The Gesar Square project is not just to design a square. After the Yushu earthquake on April 14, 2010, the team of Huahui design led by Zhou Kai received the commission of reconstruction to design the King Gesar Cultural Exhibition Hall, Urban Planning Exhibition Hall, and Archives in the center of Jiegu Town, Yushu Prefecture. The buildings and the whole site are collectively called Gesar Square.

Qinghai, an important province situated on the Qinghai-Tibet Plateau, obtained the reputation of a "great beauty" by the magnificent natural scenery. In such an environment, the architect hope the building invisible as a “supporting role” of the nature, keeping the original and deep temperament as much as possible.

Before the earthquake, the statue of King Gesar stood in the center of the square. It is the spiritual center of Tibetans and an important node on thepilgrimage road from the mountain in the southwest of the city to the Jiegu Temple in the northeast. The first task of post-disaster reconstruction is to raise the statue which has sunkin the earthquake,and keepits angle and position unchanged. The statue was raised and the Gesar Cultural Exhibition Hall was set up underneath its base. The square around the statue could still be used for worship, which is suitable for the traditional culture and lifestyle of the local people. The steps and paving were arranged radially with the statue as the center, emphasizing the spiritual center of the statue and to be more guidance.

On the south of the square are buildings, consist of urban planning exhibition hall, archive and other facilities for commercial or subsidiary functions. The architectural form refer to the traditional local dwellings, shaped into a cuboid with a long side of 210 meters.

The height of the building is limited to 9m. Architect has made the height within this range to keep the residential area on the south side out and create a quiet atmosphere for the square, which is more suitable for people who come and worship here.

In the interior of the building, referring to the practice of traditional Tibetan courtyards, we designed some Spaces with similar dimensions, creating the inward characteristic and an implicit scene, and solving the problems of ventilation and lighting.

Simple but powerful, the statue and buildings like a dot and a line in the overall layout, forming a “great beauty” scene.

The volume of the southwest corner of the building is opened to form an entrance space that is convenient for passers-by to enter the square. Therefore, it forms a line connecting the mountain, the statue and Jiegu Temple visually, satisfying the spiritual needs of the Tibetans.

Inspired by the local dwellings, the exterior material of the building is made of stones selected from nearby mountains and processed into pieces. Then, let the local Tibetans build these stones the same method of building their own house. This simple and effective method not only guarantees the effect of later stages and completion, but also formed a feeling of integration with the mountain.

The penetration of light in Tibetanis extremely strong, which often makes people feel shocked. In this group of buildings we focus on the use of light. For example, we placed a narrow skylight above the entrance to allowlight into the building. And the light not only guides the direction, but also gives people a kind of sacred psychological feeling with the strong contrast by light and dark. 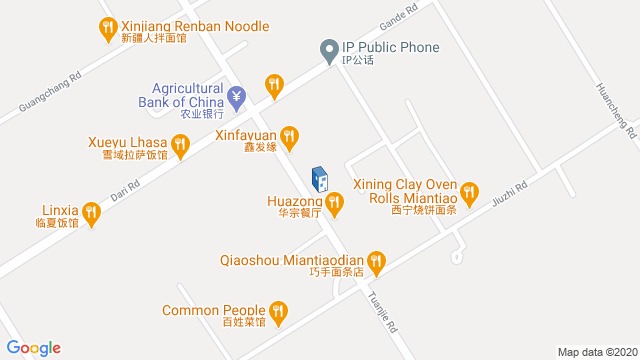 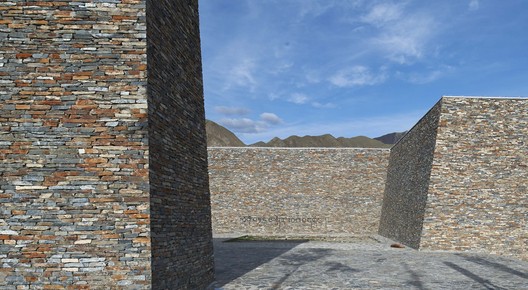