Dorte Mandrup has won the international competition to design the new Exile Museum (Exilmuseum) in Berlin. Located adjacent to the ruins of the historic railway station Anhalter Bahnhof, the museum will tell the stories of those who fled during the Nazi regime and look to today's present displaced populations. The studio’s proposal reinterprets the portico ruins on Askanischer Platz, together a monument and symbol of those driven into exile during the Second World War.

As the team outlines, the Exilmuseum’s core project will center on the human experience of exile, especially through the years 1933 to 1945, while also examining present conditions. Founder and creative director Dorte Mandrup notes that the team is honored to "be part of creating a place where the understanding of exile is being illuminated. It has never been more pressing than today where more than 65 million people are driven into exile." The team will be working with Höhler & Partner and TOPOTEK1 from Germany, along with engineering firm Buro Happold.

The new Exilmuseum will explore current movements of refugees and migrants across themes of expulsion, emigration, exile, and genocide. “To engage with the topic of post-1933 exile is, above all, to encounter human stories of extraordinary drama. It is crucial to remember what that era’s refugees suffered as well as what they achieved, not least because it sheds light on the present and on a future increasingly marked by the flow of migrants” said Prof. Dr. Christoph Stölzl, Founding Director Exilmuseum Berlin.

The museum program will include a permanent exhibition and special exhibitions, in addition to education facilities and a restaurant. The project will also address individual biographies of exiled people, tracing their life paths through "immersive experiences." The Stiftung Exilmuseum Berlin was established in 2018 as a civic initiative by Nobel laureate Herta Müller, former German President Joachim Gauck, and the art dealer and cofounder of Villa Grisebach, Bernd Schultz. The costs for building construction and equipment are estimated to be around 27 million euros, and the museum plans to open its doors in 2025. 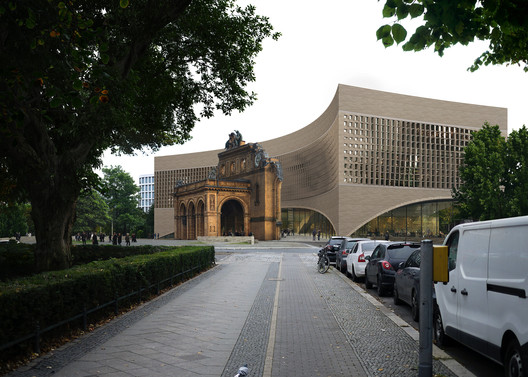