Budget Direct and NeoMam Studios, a creative studio based in the UK, have created a series of animated gifs restoring 6 UNESCO cultural sites and showcasing how these ruins would have looked like if they had been preserved. Bringing to life endangered sites, the project includes the recently destroyed ruins of Palmyra in Syria and Hatra in Iraq, demolished by ISIS in 2015.

Drawing attention to sites at risk, significant to “all the peoples of the world”, the project aims to globalize information and give everyone the opportunity to witness these spaces virtually. In fact, six ruined sites were digitally restored to their former glory, through gifs. According to the developers of the initiative, “world heritage sites exist in constant danger of degradation or destruction. From militants to motorists, earthquakes to urbanization, these meaningful landmarks face both human-made and natural threats”. In this series of GIFs, sites in Libya, Syria, Panama, Micronesia, Israel, and Iraq are rebuilt and restored.

The project started with in-depth research around sites that figure on the World Heritage in Danger list. Focusing on man-made sites comprising few standing elements, the team worked with architects Jelena Popovic and Keremcan Kirilmaz, and industrial designer Erdem Batirbek to research and illustrate these intricate reconstructions.

Check below the gifs for: 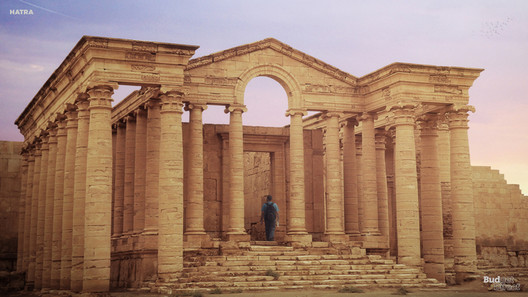