During the next decade or so, our cities will expand at an inconceivable speed. According to the UN’s 2019 World Population Prospects, our planet by 2030 is expected to have 43 megacities —classified as those with more than 10 million inhabitants. Most megacities will be in developing countries. And by mid-century, almost 70 percent of the world’s population will be urbanised, with today’s rate at just over half. Moreover, 90 percent of the urban population growth is expected to happen in Africa and Asia.

Under the global rise of urbanization, the concept of co-living has been introduced as a strategic tool to combat the lack of affordable housing in the metropolitan areas, and to provide millennial workers with enhanced communal experience. While ordinary urbanites are struggling to locate affordable accommodation, co-living spaces have become a trend among millennials, particularly in cities such as Beijing, Shanghai and Guangzhou in China, where the housing crisis is especially severe.

Mi Xiao is an architect from Guangzhou, China. Like many other millennials in China, Mi Xiao loves to hang out with her friends, who are a group of young people with broad interest and no clear division between work and life. In the hope of moving together, Mi Xiao decided to design a community of co-living.

Therefore, Mi Xiao renovated a warehouse of an old candy factory built in the 50s. She named this project “Borderless Community" because it attempts to challenge the conventional notion of community living, and to provide young people in the era of the Internet with a new way of living that’s both affordable and sustainable.

Based on the living habits of each friend, Mi Xiao customized six rooms of various scales, ranging from the studio or common area for entertainment. Within this building, there is no single room that stands by itself. The circulation encourages people from both upstairs and downstairs to come out to the street to communicate, thus a larger shared space is created. Mi Xiao aims to achieve a lifestyle in which you can live and work with your partners and friends.

Besides the streets, there are many shared spaces designed to engaging people’s social interaction. For example, a patio space is designed for people to come up and cook BBQ, or hold a late-night movie party. The space is open for any group activities, making it a perfect venue for a living theatre.

Wang Shuo, an architect who has been studying the collective living phenomenon in megacities, designed a Youth Community Centre in Jilin province, as a co-living space, which is targeted at young people who just started their work life and have found it difficult to rent a proper house due to limited income. This innovative dormitory invites both male and female workers to reside. With spacious communal space, people in this dormitory can have their dining room, kitchen, health and entertainment facilities all interconnected by bridges, stairs and stadium seating. What’s interesting is that, such design also allows more encounters to happen among the young men and women living in this place, making this place not only a 3D maze but also a stage for love stories to take place.

“Like a micro-society, this open community allows young people to do whatever they love, and share their passion with their peers and colleagues. “Said Wang Shuo, the architect.

This dormitory is a four-story building that can take a maximum capacity of 800 people. Due to the shape of the site, the building is in a long rectangular form. Wang Shuo divided the structure into quarters, two for the males and two for the females. Although in the city of Jilin, the winter can be as cold as minus 30 degrees, this building offers a warm and cozy little world for many young people.

Wang Shuo decided to place the washrooms and storage space outside of the bedrooms because many young people tend to use the bedrooms merely as space to sleep. Such design makes extra room for communal space. With a shared space between the two neighbors and some public exterior balcony space along the building perimeter, people are encouraged to come out more often to utilize the common area for casual meeting and entertainment activities. An atrium space is also created to provide more possibilities for social interactions, so that young people can have more chances to meet new friends by accident.

Co-living With Entrepreneurs and Freelancers

In Beijing, there are four young women architects that come together to celebrate a new co-living experience in the Hutongs of Beijing. They come from all parts of China and agree that Hutongs are the spaces that preserve a sense of past in Beijing under rapid urbanization and gentrification. Therefore, to start their business, they open their first studio in a tiny 90-square-meter courtyard within the second ring road in Beijing.

Upon entering the space, you will realize there are studio, bedrooms, kitchen, library and bathrooms all nicely organized around the two gigantic ginkgo trees in the courtyard.

The renovation was conducted on a tight budget because of the rent. The four architects decided to use the light materials and simple construction techniques to minimize the cost and maximize the functionality of the space.

The courtyard provides a natural space for people to hang out. Various activities are happening in the courtyard, such as brainstorming workshops, mini concert and exhibitions. Every month, a freelancer friend or an artist will be invited for a short stay with the owner. Together they are going to create some art that is inspired by such communal experience. Moreover, the greenery and street animals in the courtyard activate the space by making every guest feel like home.

Spencer Ke, the co-founder of 9 Floor Co-Living Apartment in Taipei, renovated an entire building of an old hotel in the hope of providing young migrants a resting place that’s both affordable and homelike.

Ke kept the existing 22 hotel rooms and redesigned the layout for communal space, which includes café, gallery, sitting room and cafeteria etc. He also invited people from all walks of life to come and share a better renting experience. After more than 100 interviews, he finally selected his roommates, ranging from office workers, artists, doctors, to journalists and designers.

“Co-living may not solve the issue of high housing price, nevertheless, I hope to provide a sense of belonging for those young people in a fast-paced city," said Ke. The choice to rent a place with strangers is more than finding a place to stay, but joining a big family that you can cook, communicate and hang out with people from all backgrounds.

NewsArticlesCommune DesignCommunity DesignColivingChinaCo-communityADTopic 2020 How Will We Live Together
Cite: Scarlett Miao. "The Rise of Co-living Under the Influence of Urbanization in China" 17 Aug 2020. ArchDaily. Accessed . <https://www.archdaily.com/945504/the-rise-of-co-living-under-the-influence-of-urbanization-in-china> ISSN 0719-8884
Save 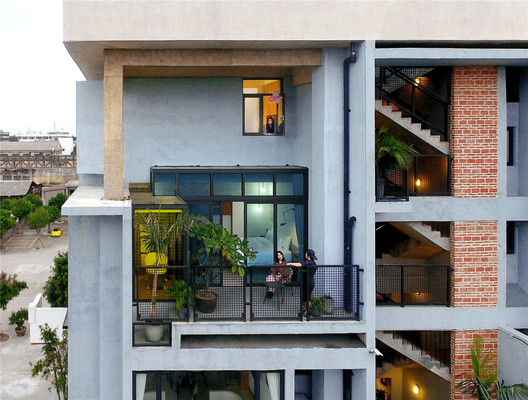