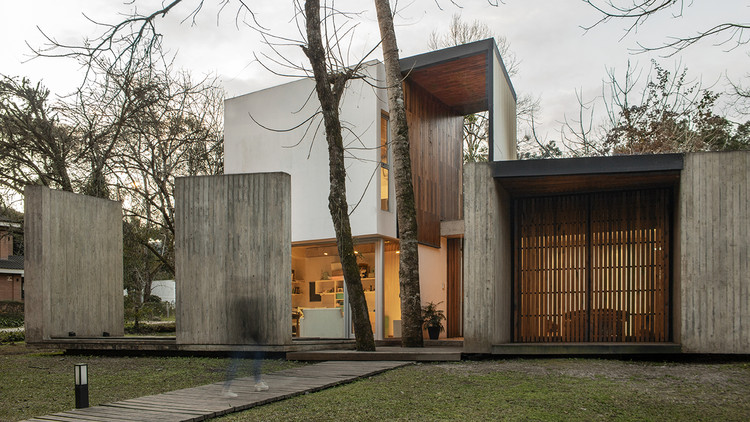 Text description provided by the architects. The abundant vegetation and deep slope found on this site in the middle of the ‘yunga tucumana’, make for a distinct atmosphere capable of inspiring the design of this single-family house at the foot of the San Javier mountains, in the province of Tucuman. The aim was to maintain the essence of the site, keeping as many of the original trees as possible and preserving the qualities of the ground, its topography, and particularities. The house sits on the highest level and detaches itself partially from the ground, separating the object from its natural context.

The site is divided into two parts, creating different exterior spaces. To the front, an open and public yard, and to the back, a controlled, close, and intimate patio. The presence of the original trees and the firm intention of making them an intrinsic part of the project, lead us to create a series of transitional spaces that embrace and integrate them with the interior spaces. The program is organized in three strips around a central courtyard. They are clearly defined as they contain the private spaces, the social spaces, and the service areas, respectively. Bridging the strips, a big roof defines an open yet covered space that acts alternately as a garage or a “Galeria”. On the upper floor, a gym and a green roof that can be accessed as a verandah, accentuate the relationship between the architecture and its surroundings.

The house is delimitated by an exterior concrete wall that encloses portions of the site in its natural state, bringing nature into the interior spaces. When the wall breaks or shifts, deep and sheltered exterior spaces are created, framing the view of the landscape. There is a clear contrast between the interior and the exterior: a rustic exterior is expressed by the use of concrete walls and green roofs while the interior manifests itself as light, smooth, almost transparent, and holds white as its predominant color. 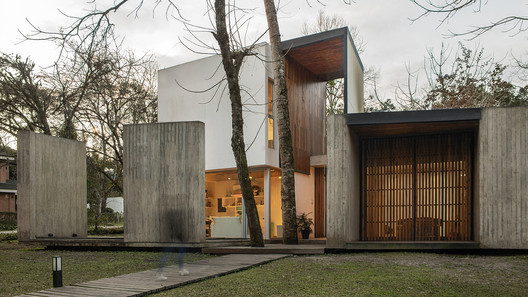