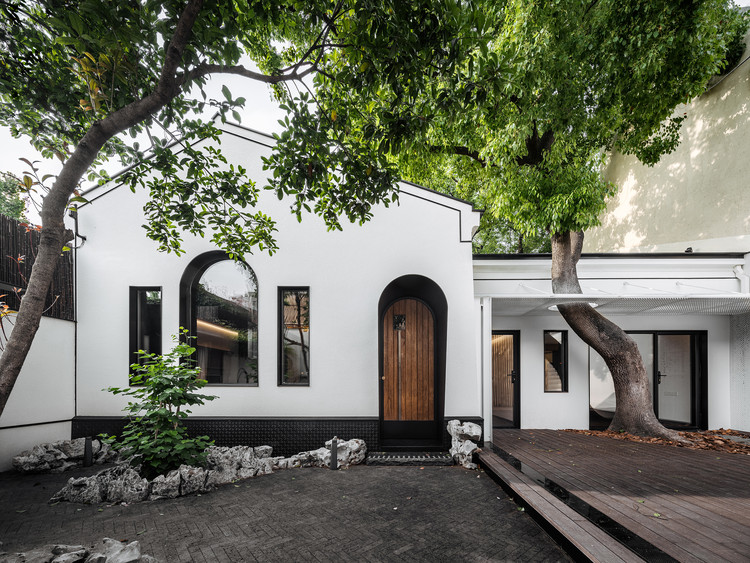 Text description provided by the architects. Wutopia Lab finished a house with a black courtyard called the hiding house.

It cost six years to finish the project. It was a small museum, a library, a showroom, a clubhouse, or a home. The variation implied a change in life. Thus, designers set out a basic architecture frame with multiple possibilities. A continues surface divided the house into two: living space and service space.

At the Southside of the continuous surface, there were a living room serving as an exhibition room and library, a canteen, a master bedroom, a tea room, a courtyard serving as garden and stage. At the other side was the kitchen, toilet, equipment room and a girl’s room for exhibition purpose. Mezzanine space was designed for services, storage space and living space.

The living room, also a library, was ritualistic and connected to the views through the window. The black bookshelves exhibited clients’ collection but limited living room’s direction. Elevator connected vertical transportation from the living room to the mezzanine space.

The mezzanine space belongs to the male client. The dark private space was connected to the living room,  bedroom and the hallway through a window. The peeking experience related back to the designer’s experience to the John Soane Museum. The girl’s room, on the other hand, was a silvering blue ‘galaxy’. Each ‘star’ was a customized exhibition shelf made of clear acrylic. This was a miniature version of the bubble installation in Anaya Children’s Restaurant.

Black was a perfect colour to emphasize green trees and the white House. The black volcanic rock along with Taihu stones, wisteria and bauhinia formed a micro Chinese Garden.

There should not be any columns in the corner of the tea room. The continuous glass window required a 4-metres cantilever structure. Staircases towards the mezzanine space should also be thin and cantilevered from the thin wall. All equipment should be hidden and cost as least space as possible. Glass window, on the other hand, should be as big as possible in order to keep the beautiful view. All of the non-standard designs cannot be achieved without the support of our design team.

Stacking stones were a hard work for both architects and workers. Taihu stone could appear differently due to its position to other stones. Thus, adjustment and replacement of those stones happened after observed and judged form different angles. The process was full of surprises and the 20 square metres site cost 6 hours to built.

The abandoned fireplace and gate became a silent record of history in this project. A continuous metal line travelled through bookshelves and walls, sevring as zero height marks in the hiding house. The red paint was stripped from the gate and led the teak texture being revealed. The building was a record of history and memory.

The curtain in the courtyard can be released and retracted from bottom to the top in order to maintain the space integrity. The idea was simple but hard to achieve. For example, the connection between the curtain and the building, water proof and drainage should be considered. But when the blurry scene was presented while the curtain divide the courtyard into a stage and a garden, I realized that it was worth it.

The architect designed the pattern of the perforated plate using the wisteria flower as a template. In order to prevent the water pipe from interrupting the continuous black line of the eaves, the water pipe has a zigzag shape to allow the black line to pass through. Whirlpool drain was introduced in order to match those Taihu stones. Also, a support was added to the middle section of the neem tree and its form was based on Dali’s painting. The variation of façade elements of the tea room, however, were heavily influenced by designer’s happy mood.

For 74 months, the client did not know what he wanted. But he was certain that he wanted to present the dramatic experience of life without exaggerating it. Both parties are listening to each other’s opinions and explaining their reasons, and then use the completeness of the work as the final evaluation criterion as the basis for their respective concessions or adjustments. It was the story when an architect designed another architect’s house.

The hiding house served as a place, and it was a place with personal identity that can be real, fictitious, or intertwined. It was a complex context with possibility, hypothesis and fantasy. In other word, a place with possible events. It existed in space, permeated with different social concepts, forming a scape of appearance or culture, and some would cause strong physiological and emotional reactions, awakening body consciousness, and the material and symbolic value of the place could create spirits in different levels.

Anyone's scrutiny, observation and cognition of a place were permeated with social concepts, but a few people would notice that weather and light could symbolize the human emotions which projected to the place. Such social concepts created places as contexts and continued to rewrite places in form. In the hiding house, the boundaries between private and public is blurred. From the perspective of events, real and fictitious, public and private were intertwined into ambiguous contexts at different scales. And the place as a context was not restricted to a fixed place or event, or even time was displaced or rewritten. It would not draw a closure but continued to develop in order to update the hiding house.

When actor travelled from the gate to the courtyard while light casted to the ground, a tremendous scene was created in the black courtyard. The beauty of this short moment was like an illusion , but at that moment, it was eternal. This was the true concept that the designer wanted to express. 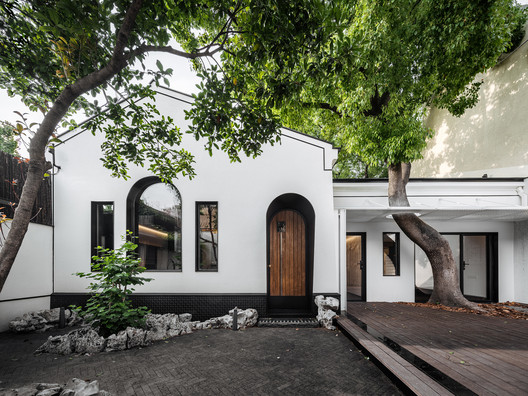