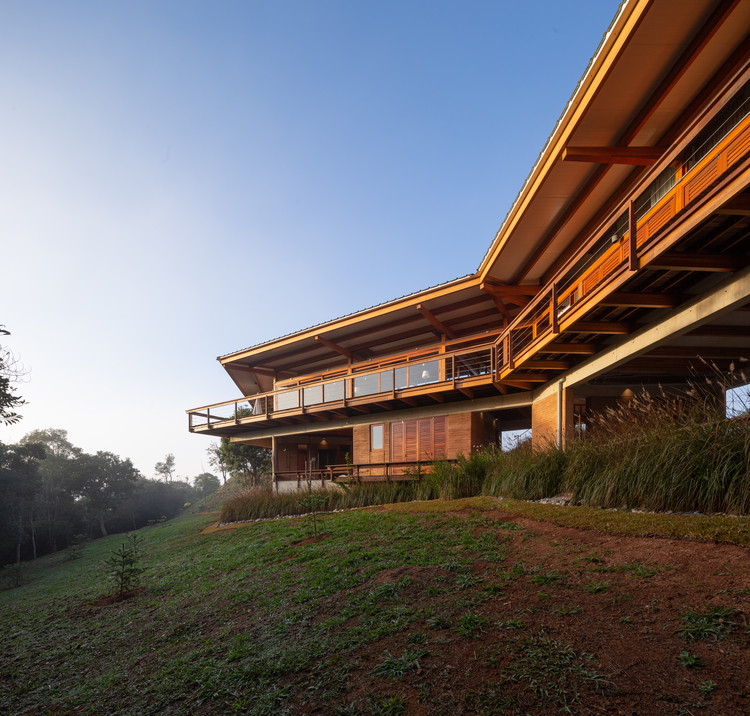 Due to the topography, the construction was implemented in an elongated and sinuous shape, with three straight sections forming an open “S”. Therefore, the building fit the profile almost without any earthmoving. All of the rooms face the back of the lot, enjoying the northern/northeast light and magnificent view of the horizon over the adjacent native forest. On the opposite side, facing the access street, wooden slats protect the rooms along the entire facade, in a light and not totally opaque way, preserving their privacy.

All the soil generated by the earthmoving and foundation excavations was used to create the base of the building, composing three volumes (boxes) of rammed earth walls, in a retake of this ancestral technique. These walls, which are 30cm thick, accommodate programs such as: the cellar, guest-rooms and service spaces. The open spaces between the three volumes are used as covered porches and garage.

There are no concrete columns, so the upper structure should not cause moments or kinks in the earth walls that should only work with compression. Thus, two longitudinal concrete beams were designed to distribute the loads evenly over the rammed earth walls. The eucalyptus glued laminated timber structure from the upper floor rests smoothly, through a modular sequence of transversal wooden beams, on the concrete beams, in a balanced way that avoid twisting. The entire structure was quickly assembled and covered with polyurethane sandwich roof panels protecting, since the construction period, the earth walls and wooden structure from de weather. The metallic panels are used both as roof and ceiling lining; the outer surface was painted in “terracotta” color and the lower inner surface, in white.

On the upper floor, the residential program is organized in a linear manner: on one side the bedrooms and bathrooms, and on the other, the social space, quite transparent to the landscape. These two sectors are separated by a gap: a wide-open porch, which forms an entrance space at the center of the house. In the social area, all functions are integrated and open, reinforcing the idea of sharing activities, and always enjoying the landscape and the horizon.

The house also has its own sustainable system. Such as: solar heating, generation of photovoltaic energy, and collection and reuse of rainwater. What makes this building practically self-sufficient in terms of water and electricity consumption.