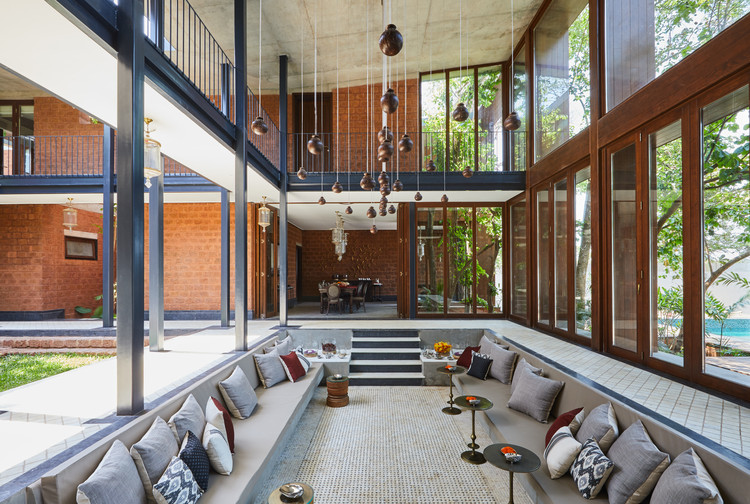 Text description provided by the architects. The House of Multiple Courts at Nachinola  is located in a settlement within the midst of a serene littoral landscape adjacent to lush paddy fields. The house is built with solid load bearing laterite stone blocks that form three sides of the house with a laterite and wooden colonnade on the fourth wall facing the north with views to the river.  The sold laterite stone block walls manifesting as simple opaque walls, porous screens and structural corbels depending upon the program they enclose.

The interior programs of the house pivot around a series of courts the first of which is an entrance designed through the water court designed around a restored existing well found on site. The sequence of courtyard experience are scaled to respond to varying degrees of common & private programs. An open to sky central courtyard ties the whole house leading to programs of the living room, dining space eventually to the pool overlooking the riverine landscape.

The bedrooms open into smaller, more intimate courtyards with their roofs modulated to cascade rainwater into these landscaped courts. The architecture of the house at Nachinola is hence a device for framing the horizontal scale of the riverine landscape beyond and conversely captures a scaled version of the landscape within the house. 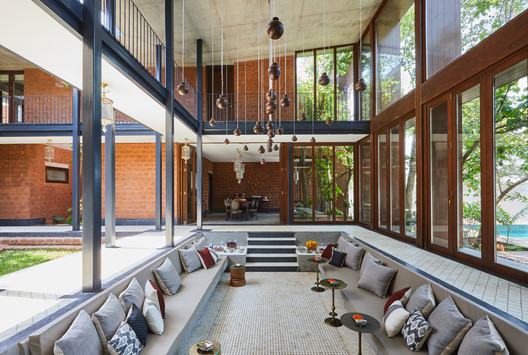