Save
Projects to Revive Traditional Spanish Architecture: Winners of the 2020 Driehaus Architecture Competition
Share
Or
Copy

The results are in from the 2019-2020 Richard H. Driehaus International Architecture Competition, a contest put on by the Spanish government that invites architects and urbanists from around the world to design projects that promote local, traditional Spanish architecture.

This past competition featured four Spanish cities: Santa Cruz de la Palma, Santiago de Compostela, Alzira, and Guadix, which were all proposed by local Spanish municipalities and chosen during phase one of the competition. Sponsored by the Ministry of Transport, Mobility, and Urban Development, this unprecedented and generous initiative on behalf of American financier Richard H. Driehaus, through the R.H.D. Charitable Trust, seeks to collaborate with architects from across the globe in order to revive traditional Spanish architecture.

The competition offers prizes and publicity to architectural and urban projects that focus on traditional architecture as a way to celebrate local identity and to make more beautiful, coherent, and sustainable urban spaces. Contestants are encouraged to use traditional materials and building techniques of the places that they choose to showcase and are awarded extra if their projects include employment opportunities for the communities they work within. This year's competition (2019-2020) marked the fourth year running, with the past three taking place in 2017, 2018, and 2019. The ultimate hope of the competition is to showcase designs that solve many of today's housing and urban dilemmas while also honoring Spain's architectural history and culture.

During the postulation period, more than 100 national and international architectural studios presented their proposals centered on the three cities featured in the competition (Alzira, Santiago de Compostela, and Santa Cruz de la Palma) along with the city of Guadix, who regained its candidacy after being deserted in 2019.

The jury, made up of representatives from the Ministries of Transportation and Culture, the CSCAE, INTBAU (International Network for Traditional Building Architecture and Urbanism), and the local government of the 4 featured localities, met virtually to decide on each project, eventually choosing the following winners:

Hydrangea focused on reviving various structures, mainly ruins, to create housing for artists. It sought to connect the zone with the Santo Domingo de Bonaval park and to repurpose an old storage facility into a space for workshops and expositions.

Ad Fontes focuses on repairing the urban fabric of "la Vila," placing special care on the remains of the Almohad walls and the temple of Santa Maria. The proposed new streets would intersect in a plaza connected to the bank of the Júcar River. Furthermore, it plans to revitalize the old local church, turning its bell-tower into a scenic vantage point.

The project Pisando la Tierra for Guadix seeks to revitalize Alcazaba. The proposal stood out for its vision of revamping the Plaza Pedro de Mendoza and making Alcazaba more accessible. The final goal of the project is to rebuild houses in the Occitan style and to remodel the Palacio de los Saavedra to create a hotel.

The project proposed for Santa Cruz de La Palma was declared deserted. The jury determined that none of the projects proposed for the locality complied with the challenges set forth by the competition.

The winning designs will be a part of an exposition following the awards ceremony in October. Furthermore, the first phase of the 2021competition has just been opened so that all localities interested in competing can send in their entries. 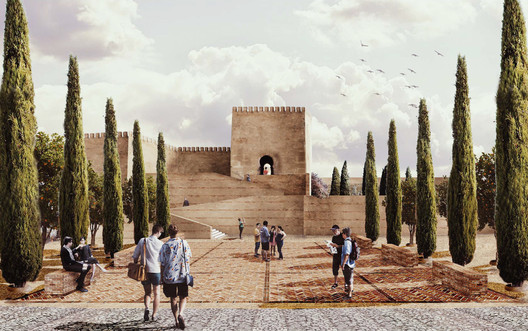