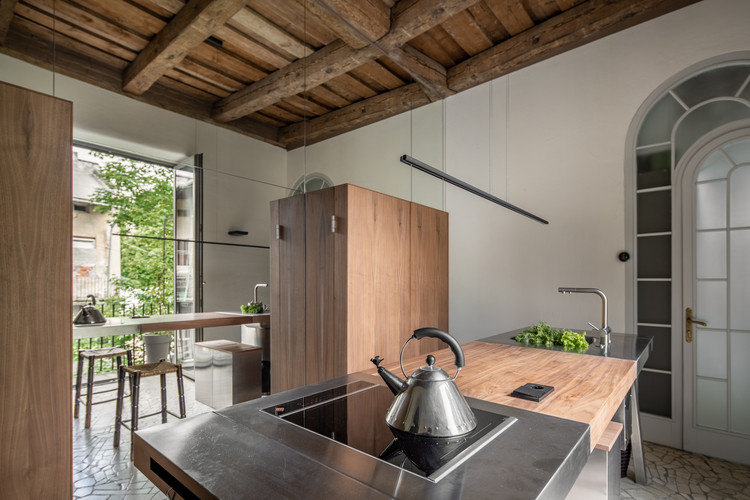 Text description provided by the architects. Guculska apartment is a project by the Replus bureau that rethinks traditional Hutsulian ethnic style within the neo-renaissance Austrian environment.

The project was about refurbishing and redesigning an old apartment in a historical building in the heart of Lviv on Hutsulska Street. The building itself was constructed in 1892-1896, so our project designers decided to keep everything that survived in a good condition from those times. Keeping authentic parts and adding some new ethnic elements created a sense of time, highlighting the modern aspects of this space.

Context. From the very beginning, we were limited by extremely narrow and long rooms, therefore our major goal was to create a sense of extra space by means of mirrors and right furniture positioning. The apartment was in a sorry state, hence the cracked ceilings in the kitchen and in the living room had to be removed. Above those ceilings, we discovered old wooden beams that we kept. Some of them were already rotten, as well as the kitchen floor. We dismantled those parts and reinforced the structure. Having integrated underfloor heating, we covered the floor with natural marble tiles. Parquetry flooring in the rooms was also renovated throughout the apartment.

Wall sconces were installed very carefully because of the small frescos we had found in the bedroom. We scraped off numerous layers of paint from the authentic late 19th century doors between rooms and varnished them. Another element to have been saved and repaired was a vintage mid-19th century wardrobe. It turned black over the years, because of multiple layers of varnish. We decided not to touch the surface, we just realigned it, made minor fixes, and left it as it was.

A historical stove from the Levynskyi factory was reincarnated in a big open fireplace. It was done following a classic technology by Count Rumford, a British inventor, where a fireplace is not deep and its angled sides reflect heat into the room. It is not a common technology either in Ukraine or in the neighbouring countries.

Designing this space, we were trying to retain a certain ambiance and spirit of an apartment in the historical centre of Lviv. We also wanted to accentuate a friendly neighbourhood environment in Lviv's typical courtyard where neighbours communicate from their balconies. As part of that concept, we replaced the windows that face the courtyard using large aluminum frames that open wide. The windows on the main façade were replicated according to an old technology using wood and original window fittings.

Kitchen. A big light multifunctional kitchen table carries a sink, a cooking surface, and some space to have breakfast or to work from home. Open walnut kitchen cabinets ensure easy and quick access to everything without pulling any doors.

Bathroom. The bathroom is small, so we had to keep it unobstructed. There is neither decor nor furniture in the bathroom, only the essentials. We could not imagine a bathroom without a window, because it is the most important room where the day begins. We needed more daylight, so an additional little round window was installed. The sink is supported by a burned log. We placed a bathtub in the bedroom to give a chance to enjoy the sounds of the city with wide-opened windows while taking a bath. It is worth to mention that there are no ceiling lights in the bathroom, in the kitchen and in the living room. The air conditioning system was placed in the attic above the apartment.

Bedroom. The bedroom’s layout was altered to isolate the children's room. A partition was made with the door reinstalled, glass added at the top, and cloakrooms arranged at the sides. The apartment’s owner wished to use two wooden beams removed from an old Hutsul house in the country. Those beams with engraved inscriptions originate from the house that was built by the owner’s grandfather. As the old house does not exist anymore the beams are of special importance and create a link between the family generations. 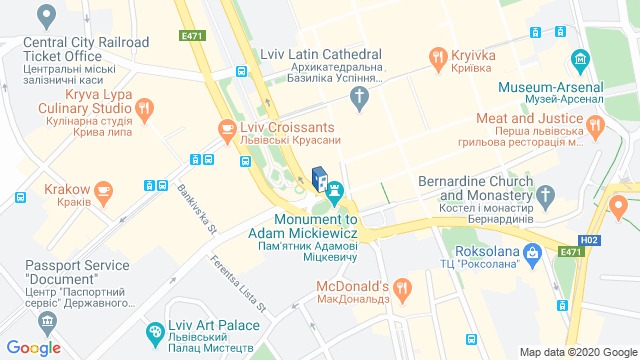 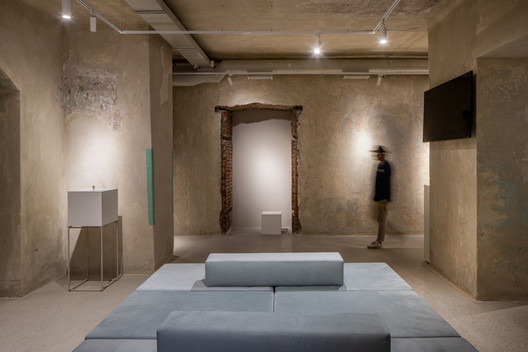