Text description provided by the architects. Architecture's main concern has been the city, its future and its transformations, but the future of the city may be the countryside in the face of climate and political collapse. Casa Calixto allows us to reflect on the possibility of offering rural contexts in the creation of new biopolitical realities.

The house is articulated with a simple program: a garage well connected with the garden to make parties with friends, and a sunny house looking to the landscape with a radical opening controlling the entrance of sunlight through a big visor. The project is based on the logic of tours through the house, as a promenade architecturale, as well as in the connection with the landscape and garden.

A perimeter wall that gives continuity to the local landscape, generates height differences that allow a double dialogue: to observe the landscape from the inside as well as to preserve the privacy from external views. The transition between inside and outside is materialized through a horizontal opening to the garden and two vertical ones for the entrance of light.

When walking through the house, small openings link the inner domestic world with the exterior landscape. The garden is not seen as the "no-house", but as an intermediary with the landscape through a new topography.

Materiality. The house tackles the difficult task of giving continuity to the vernacular landscape with contemporary construction. Consequently, the structure of the house is made of concrete that allows working with the local construction companies and enables an organic, imperfect, and handcrafted result. The cladding is made with stone masonry from a local quarry used as raw material for gravel. The stone used is the result of the surplus material in large slabs production which makes it very economical.

The resulting vernacular construction is linked to the environment. In the same way, the stone requires a manual construction that gives it strength and integration with the landscape. The thickness of walls and roof (0.6m) provides a high thermal inertia to the tempered house with an aerothermal system under the ground and the concrete front porch gives shadow on the hot summer and allows the sun entrance in the harsh winter. 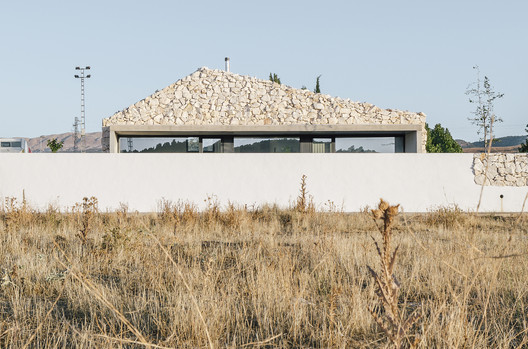